She invited any artists wanting to do a reading of her comedy The Taming – A New Political Comedy to do so for free on Inauguration Day 2017. 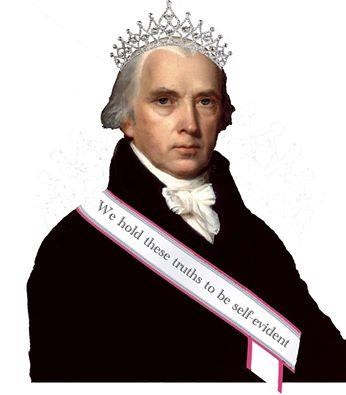 Atlanta’s Weird Sisters Theatre Project, Synchronicity Theatre and 7 Stages are among more than 40 companies to accept her offer. The Atlanta staged reading of the comedy is at 7 p.m. Jan. 20 at 7 Stages, 1105 Euclid Ave. NE. Admission is free, but a $10 donation is suggested. All proceeds will go to the American Civil Liberties Union (ACLU). Cash is preferred at the door.

Gunderson is the second-most-popular playwright in America this season, according to the trade publication American Theatre, trailing only the late and august August Wilson.

She describes her 2013 piece as a play about “modern American political extremism, feminism and beauty queens, the gangly Democratic Republic of America, James Madison, the GOP, liberal angst, Shakespeare’s Taming of the Shrew, Miss America and three slightly insane women who might just be political geniuses.”

“I wrote The Taming, an all-female political farce for Crowded Fire Theatre, to unpack the deep frustration of a divided and obstructionist patriarchy, to laugh with the painful truth about extremism on both sides, to toy with our country’s history and wrestle with its foundational imperfections, and to make manifest a dream of reason and understanding prevailing in America.”

Crowded Fire is in San Francisco.

The 40-plus readings planned are happening at ArkansasStaged in Bentonville, the Comrades in Chicago, the Tipping Point Theatre Company in Columbus, Ohio, ThinkPink Productions in Evansville, Ind., Pussycat Productions in Salt Lake City, Aspie Works in Rochester, N.Y., and Dragon Productions in Redwood City, Calif., among other places.

In addition to the ACLU, donations will go to Planned Parenthood, the Southern Poverty Law Center and the Women’s Foundation of Genesee Valley (N.Y.).

Gunderson’s comedy is the third in her Shakespeare Cycle, along with Exit, Pursed by a Bear, based on a famous stage direction from The Winter’s Tale and staged in 2011 by Synchronicity, and Toil & Trouble, an “uber-capitalist-hipster Macbeth.”

Gunderson returns to Atlanta (and Synchronicity) on May 4-5  for a one-weekend workshop and two public performances of a new piece titled The Heath, in which she appears. It’s described as a “deeply personal one-woman (and a guy) bluegrass musical based on King Lear … kind of like a Shakespeare hoedown that might make you cry.”

Gunderson’s The Revolutionists was seen last season at 7 Stages, and her EMILIE: La Marquise du Chatelet Defends Her Life Tonight in 2013 at the Weird Sisters.

She has also been produced locally at Aurora Theatre (the award-winning I and You), Essential Theatre (Background and Parts They Call Deep), Theater Emory (Leap) and Theatrical Outfit (Silent Sky).