“A CHRISTMAS STORY’ BEGAN AS A SO-SO FEATURE FILM, MORPHED INTO A TV FAVORITE AND BECAME A DARN GOOD STAGE MUSICAL.

HOW MANY TIMES can we howl over a mom fretting that her little Ralphie will shoot his eye out if he gets an official Red Ryder Carbine-Action 200-Shot Range Model Air Rifle for Christmas?

You might be surprised to know that A Christmas Story, the 1983 feature film that fixes on the Parkers, a middle-class Indiana family at the end of the Great Depression, didn’t do well at the box office when first released.

It found widespread enthusiasm gradually, after Ted Turner bought the MGM film library in 1986 and began showing it on his cable networks, and later when when TNT, then TBS, began airing the “24 Hours of A Christmas Story marathon.”

“Would you really want to watch the movie a dozen times?” asked a writer for SFGate, the online version of the San Francisco Chronicle. “Probably not,” but keeping it rolling on your TV “serves as a nice backdrop to your holiday festivities and might be more entertaining than cousin Eddie’s stories.”

The marathon consistently sets ratings records; some 50 million viewers now tune in for at least part of it. Reason enough to create a Broadway musical? You betcha. That happened in 2012.

The musical, like the movie, follows one 9-year-old boy’s desperate desire for a super-duper toy. The tale is merry and bright, sentimental without too much syrup. It touches on a dad’s desire to be something other than ordinary, and a frazzled mom who just wants the turkey to come out OK.

When the show opened on Broadway, The New York Times’ Charles Isherwood praised it for “being less glitzy and more soft-spoken than the garish, overbearing” holiday stage musicals How the Grinch Stole Christmas and Elf. Comparatively, he wrote, A Christmas Story “glows with sepia-toned nostalgia for a simpler time.”

A critic writing for a film-related website said the show’s catchy songs added “a depth to the story that the film didn’t have.”

The stage musical has toured twice previously, but never to Atlanta (although Georgia Shakespeare staged it some years back). The tap-dancing Ralphie is played in rotation by Myles Moore, 13, and Austin Molinaro, 12. Moore was one of two Ralphies last season; Molinaro is new. Susannah Jones as Mother and Christopher Swan as the Old Man (what Ralphie calls his dad) are touring for a third time. 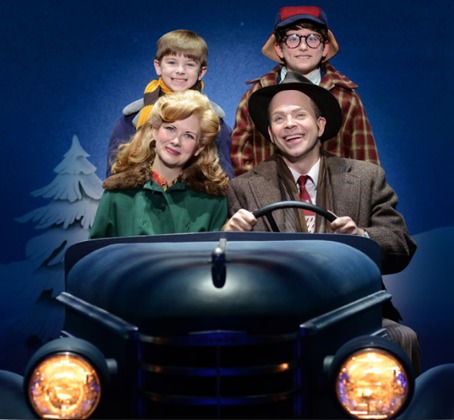 Reviewers have remarked positively on Jones’ warmth and radiance. Swan plays the Old Man “with a light hand and gives nuance and depth with pitiful, Mr. Cellophane-esque moments of yearning,” a Dallas critic said, referring the invisible sad-sack immortalized in song in the musical Chicago.

“When you read certain reviews, you go, ‘Yes, it’s working, what I’m doing?’” says Swan. The Old Man must be likable and funny, but also “the authority figure losing his temper and swearing at the furnace and the car. There’s a thin line in terms of making him real.”

Swan enjoys being back with Jones. On the first tour, they had to worry about the nuts and bolts of the show. “But last year our lines really started popping. This time, I think we can really just own it, have fun, even play around with it.”

Darren McGavin and Melinda Dillon played the parents in the feature film. Peter Billingsley, the movie’s famously bespectacled Ralphie, is one of the musical’s producers. The whole franchise began with In God We Trust, All Others Pay Cash, a 1966 collection of humor stories from memories of Jean Shepherd, a Midwestern radio host who co-wrote and narrated the film. Shepherd died in 1999 at age 78.

For Swan, playing the Old Man means a transition from leading man to character roles. “At first, I wondered, am I funny enough? Am I interesting-looking enough? But certain directors could see it. I love them for giving me a chance to discover what I could do both vocally and comically.”

McGavin’s movie dad was gruff and resigned to his lot in life, but Swan’s take is closer to a guy “who hasn’t quite accepted his humdrum life. He still has some big hopes for himself.”

How better to demonstrate that zeal than to dance with a line of leg-kicking lampshades? A fancy leg lamp, of course, is the Old Man’s award for winning a crossword puzzle contest. “Ralphie to the Rescue,” a rambunctious Old West shootout fantasy, is among other movie moments brought to brassy musical life onstage.

Did Swan, now in his late 40s, ever want something really, really bad for Christmas?

Ah, yes, he says, recalling his 1980s childhood in Vermont.

At about 11, he was obsessed with Star Wars and asked for the Millennium Falcon, “a big plastic Hans Solo ship with buzzers. You could put all your action figures inside it and re-enact the stories.”

That was his Red Ryder. “All signs were pointing to me not getting it. I pushed and pushed. I circled it in the Sears catalog and was sure my parents kept not seeing it.”

When he did get it, he was “jumping around the room, high as a kite.”

The thing still works, says Swan, who passed it on to a nephew. Much as he likes to entertain others, he likes to give.

“I’m a Christmas kind of guy.”