“Then Abram bound the youth with belts and straps,

and builded parapets and trenches there,

And stretchèd forth the knife to slay his son.

When lo! an angel called him out of heaven,

Saying, Lay not thy hand upon lad,

Neither do anything to him. Behold,

A ram, caught in a thicket by its horns;

Offer the Ram of Pride instead of him.

“But the old man would not so, but slew his son,

And half the seed of Europe, one by one.”

English poet & soldier killed Nov. 4, 1918, one week before the Armistice

THEY THOUGHT they’d be home by Christmas. In August 1914, young men from Austria-Hungary, the United Kingdom, Russia, the German Empire, France and other nations flooded recruitment offices. By December, hundreds of thousands lay dead. 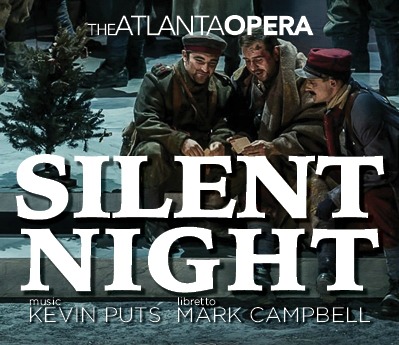 In four years’ time, the First World War (1914-1918) snuffed out the lives of some 17 million people, brought down four empires and sowed the seeds of World War II. It was a pivotal chapter. At the beginning of the 20th century, war’s architects deployed cavalry and rifles with bayonets. By 1918, they used tanks and weapons of mass destruction.

People emerged feeling betrayed by the values of their fathers. Disillusionment displaced romantic notions of valor and patriotism, hence Hemingway’s epigraph (via Gertrude Stein) calling them the “Lost Generation.”

Silent Night represents an ensemble of these reluctant functionaries, men trapped by the roles assigned to them by birth and opportunity — cogs in the engine of Europe’s destruction, and their own.

In September 1914, some 30 miles from Paris, Allied forces repelled German invaders, pushing them northward. There, both sides cut trenches into the earth, forming a matched pair of impenetrable lines. In a series of semicircular maneuvers, each side scrambled to outflank the other. One would sweep northward, then the other — each time digging in.

Known to history as “the race to the sea,” the trenches grew like cracks in the ice until they extended more than 400 miles between the Swiss border and the North Sea (comparable to the distance between Atlanta and St. Louis). Locked in a stalemate, the military brass formulated plans for victory by attrition.

The rat-infested trenches were incubators for disease. Under the stench of gunpowder and decaying bodies, soldiers stood for days in putrid water. Hospital wards swelled with cases of foot infections, lice-borne “trench fever,” and venereal disease (more than 400,000 cases in the British army, alone). The space between the trenches was even more deadly. A tangle of barbed wire, corpses and upended earth, No Man’s Land, as it was called, offered a shooting range for enemy snipers.

There was, however, a phenomenon known as “live and let live.” Between episodes of horrific violence came periods of boredom. Men noticed a precipitous drop in gunfire during mealtime. Troops became proactive, with an “if we allow the other guys to eat in peace, they will return the favor” philosophy.

In this way, the two sides brokered slightly less belligerent positions. Similar rules applied to latrines and even chance encounters in No Man’s Land. Holding up signs, throwing stones with messages attached, calling out and in-person meetings became viable methods for negotiating terms of engagement.

World War I alliances, as they existed in August 1914, belied the tangle of relationships between peoples. Germany’s Kaiser Wilhelm II, the Russian Czar Nicholas II and Britain’s George V were all first cousins, grandsons of Queen Victoria.

Cross-border interactions between French, German and British citizens had been common in peacetime; in wartime, antipathy between French and British soldiers — allies — was widespread. To further confuse matters, civilian populations were bombarded with wartime propaganda.

One British soldier wrote: “At home one abuses the enemy and draws insulting caricatures. How tired I am of grotesque Kaisers. Out here, one can respect a brave, skillful and resourceful enemy. They have people they love at home, they too have to endure mud, rain, and steel.”

Silent Night throws a cross-section of society into the trenches: a general’s son, a singer, farm boys and members of the working class. It’s the people we cannot see, the heads of state, the “fat old men … swigging their champagne,” according to the character named Nikolas Sprink, who are the real villains.

Sprink, a professional opera singer, is the first to show symptoms of Gertrude Stein’s “Lost Generation.” He sings:

“My Anna,
I cannot go back
to my life before.
I cannot.
I have seen too much.
I know too much. Everything is useless. All of it:
Opera, singing, useless.”

Silent Night, which won a 2012 Pulitzer Prize for Kevin Puts’ music, is based on real-life accounts of spontaneous ceasefires along the front lines at Christmastime 1914.

The story, commissioned by the Minnesota Opera, came to librettist Mark Campbell via Christian Carion’s Academy Award-nominated film Joyeux Noël. In the opera, composer Puts uses the relationship between dissonance and tonality as an allegory for war and peace.

In the opening scenes, the armies sing their national songs at one another, creating a cacophony that advances the fighting where stage combat leaves off. In Act 2, as the enemies begin to come together, so does their music.

Silent Night’s story pivots around an act of pure madness: Sprink climbs upon the parapet to sing Christmas carols with the enemy. A laying down of arms follows, with soldiers exchanging cigars, whiskey, champagne and chocolate. Together, they share family photos, kneel in worship and bury their dead side-by-side.

Like Amadeus or Romeo and Juliet, Silent Night is a tale that teases the audience with hope. We look for a different outcome, even though we know better. The generous spirit that silences guns on Christmas Eve cannot overcome the weight of history. By opera’s end, the “fat old men” restore order among the ranks, and the warriors fight on.