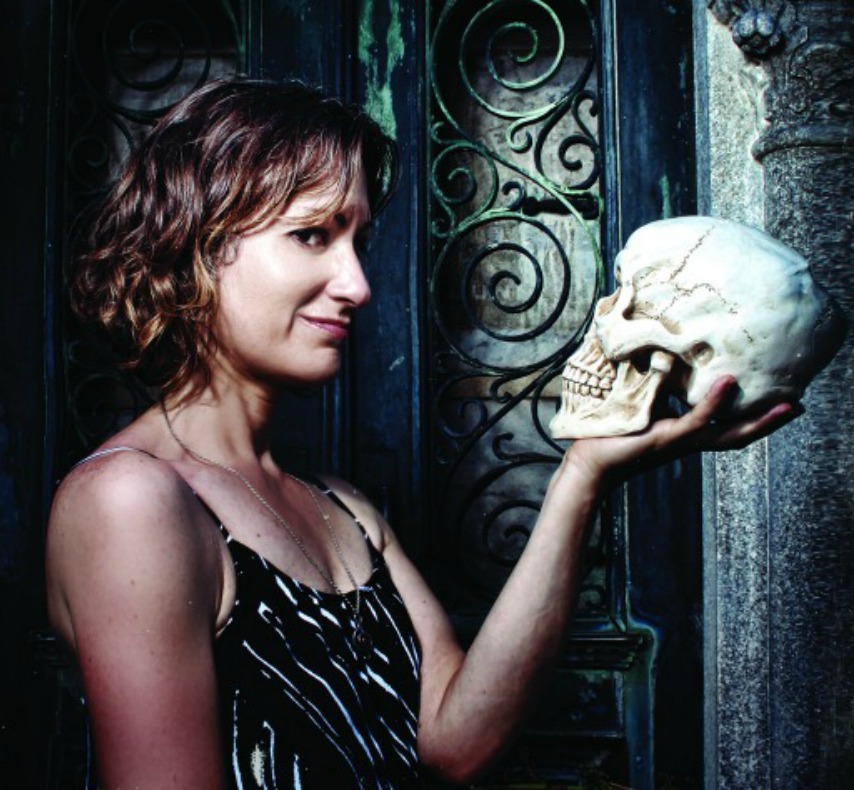 IN BRIEF: Daryl, 44, is an actor, playwright, lyricist/librettist and graphic designer who has been in Atlanta for six years. Her play Freed Spirits, about a geeky band of explorers seeking out spirits in Oakland Cemetery after a tornado, is in the midst of its world premiere at Horizon Theatre. (Freed Spirits tickets HERE or at 404.584.7450 through Oct. 30.)

NEXT: In December, her full-length comedy The Flower Room is part of the Threshold New Play Festival at Actor’s Express. It follows an uptight academic who loses her job teaching primitive sexual behavior, then explores a new career writing erotica. In May, her Split in Three, a drama about three sisters and segregation in the Mississippi Delta, circa 1969, plays Aurora Theatre’s mainstage.

ABOUT THE FLOWER ROOM: Its genesis is a July 2015 playwriting event — known as a “bake-off” — at Emory University. The idea, which comes from Pulitzer Prize-winning playwright Paula Vogel, gives four writers 48 hours to create work that responds to a common source material. Each piece had to have four characters, follow certain other restrictions and respond to the 2010 nonfiction book Sex at Dawn, which deals with the evolution of monogamy in humans. Says Fazio: “Having those requirements meant I wrote a play about sex, which I never would sit down to do.”

THE ACTING THING: These days she’s onstage less than she’d like, but she’s content riding the hot hand and waiting for the right roles. “When you’re a freelancer, you kind of have to go where the work is. When you’re really busy having plays produced, it’s hard to audition. And vice versa. I consider it pretty crucial to my development to be doing all three things, including graphic design.”

FIRST MEMORY OF THEATER: At age 6, in a production of Rudyard Kipling stories that became a children’s musical about how elephants got long trunks. She was the crocodile. “I was seriously hooked.”

SOMETHING IN THE WATER? Daryl grew up in Starkville, Miss., the hometown of another Atlanta-based actor-playwright, Suehyla El-Attar. “I met her for first time when she was 14,” says Daryl, who was an upperclassman. “I was the teacher’s aide for the first drama class she took.”

WHY ATLANTA? “Chicago is too cold. New York is a little too crazy. So it was Atlanta, and it’s the best decision I ever made.” She made the move “very, very consciously to become part of the theater community.”

HER PLAN: Contact metro theaters as a professional graphic designer. Meet people, work for them and introduce herself as a playwright and actor over team. It worked like a dream.

LIVES NOW: In a 100-year-old house in Adair Park, just southwest of downtown, with her dogs August, a German shorthair pointer, and Sarah, a pit bill rescue (named for the playwright Sarah Ruhl), and cats Cori, Harriet and Possum. “I love that it’s integrated, that you never really know what’s going to happen and that it’s close to the city.”

IN THE WORKS: An untitled piece that dates back two summers to another gathering of playwrights at Emory. It’s about an alternate reality in the history of time, in which the entire medical care system was designed by women. They are the only ones who can put their hands on people.” She’s hoping to finish the first draft this month and submit it for a full workshop as part of Working Title Playwrights’ Ethel Woolson Lab. Watch for it.