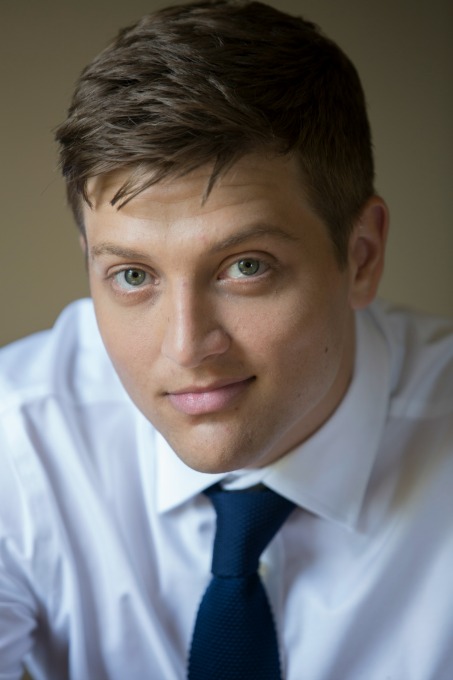 IN BRIEF: Brian, 26, is the two-headed royal atop Synchronicity Theatre’s staging of Anne Boleyn, a revisionist history play that, as one London critic put it, “takes the tame conventions of historical drama and hurls them into the privy.” Brian plays both King Henry VIII (in the 1520s and ’30s) and King James I (in 1603-04). He’s in all but nine scenes of the two-act, 27-scene piece. Anne Boleyn runs through Oct. 16. Tickets HERE or at 404.484.3626.

WHERE YOU’VE SEEN HIM: In Serial Blackface and the Rocky Horror Show at Actor’s Express; The Commission at 7 Stages; Deathtrap and And Then They Came for Me at Georgia Ensemble; Madeline’s Christmas at Horizon Theatre; and I Do! I Do! I Do! at Stage Door Players.

ON FILM/TV: Leading roles in Spec and Task, films made with the Art Institute of Atlanta. Supporting roles in single episodes of “Quarter Life” and “Walter Frisk Let’s Go.” A guest-starring role in an episode of “Homicide Hunters.” He also does voiceovers and audiobooks.

COMMERCIALLY: As the “Meemaw” guy on the Zaxby’s fried-pickle TV spot. Also in a Zaxby’s boneless-wings ad. In video and still photos for AT&T’s “Shine” national in-store campaign. And in a channel-specific spot on Adult Swim for the new feature film Snowden.

BACK TO THE BEGINNING: His first time onstage, as he recalls, was a Vacation Bible School play in fourth or fifth grade. “To my memory, it was something I just fell into.” He was in the church choir but had no inclination to act. Acting came more earnestly in middle school in such shows as You’re a Good Man, Charlie Brown, Oliver! And The King and I.

HOMETOWN: St. Cloud, Fla., a city of about 41,000 just outside of Kissimmee and near Disney World.

EDUCATION: A 2012 B.A. in acting from Rollins College, a school with about 3,300 students in Winter Park, Fla., plus a 2012-13 acting internship at Florida Repertory Theatre in Fort Myers, master classes and extended training in acting, improv and vocal work.

WHY ATLANTA? While at Florida Rep he became good friends with fellow intern Molly Coyne, who’s from Atlanta and planned to return when the internship ended. “I didn’t have any real desire to stay in Florida,” he says, adding that she talked about the nexus of theaters in Atlanta. In fall 2013, he moved into her parents’ house. A year later he and Coyne began dating. They’ll be married Oct. 8, 2017.

LIVES NOW: In a Vinings apartment with his fiancée, Molly, and their cats, Toby and Little Stink.

WHY THEATER: Attending an arts magnet high school was enough to convince him to major in theater in college. Because of a girlfriend situation at home, he opted not to audition for any fall shows at Rollins. And missed acting, horribly. “Acting was never a hobby, but I realized how important it was to me as a person, and the joy and fulfillment it gives me.”

DREAM ROLE(S): Hamlet. Henry V. Any of Shakespeare’s kings or princes because “they present such an immense challenge.” Classical theater is his real passion, and he’d like to play some of the great roles “while I feel I have youth in me still.”

NEXT: The Mousetrap, Agatha Christie’s 1952 murder mystery, at Florida Rep. He plays Sergeant Trotter, a lead role. Coyne plays Miss Casewell. “It’s our first professional show together since we were interns.” It runs Nov. 29-Dec. 18. In January, he and Coyne will move to New York.

IN FIVE YEARS: “I would love to see Molly and I really be well-established in the professional acting world. To me that doesn’t necessarily mean being on Broadway or stars in New York. My goal has solely been to support myself as an actor. If we can act, and dedicate 100 percent of our working hours to it, that’s where I want to be.”