LINDSEY FERRENTINO grew up in a loud and boisterous family of storytellers and professional comedians in a tight community along Florida’s Space Coast. A large and sunny sign said “Welcome to Merritt Island … Where Dreams Are Launched.”

Her most visceral childhood memories include watching shuttle launches from her roof. “Rockets that literally shook my house,” she recalls. “Schools would stop, cars would pull off the highway. Whether you were in a bank or a grocery store — everyone would pause their life for a brief moment, stand together and silently look at the sky.”

For her, the loss of that “very American dream,” that frontier spirit, came at great cost and had a ripple effect on how people interacted. “If you take away that communal hope, that capacity to explore, what is next? What does the next dream for our country look like?”

Ferrentino’s Ugly Lies the Bone delves into those questions, though she admits that the answers remain elusive.

FERRENTINO, WHO JUST TURNED 28, has completed 10 full-length plays. This season her work is being seen coast to coast and beyond, from the Goodman Theatre’s New Stages Festival in Chicago to South Coast Repertory in California, and from the New Works Lab at New York’s Playwrights Horizons to the National Theatre in London.

Her big year begins here, at the Alliance Theatre, “the first theater to ever treat me like a professional,” says Ferrentino. She’s the only two-time finalist in the Alliance/Kendeda National Graduate Playwriting Competition (with Magic Man in 2014 and Moonlight on the Bayou this February).

Ferrentino, who has master’s degrees in playwriting from both Hunter College and Yale, just won the 2016 Kesselring Prize for Ugly, which has won previous awards as well. The Kesselring goes to a playwright on the verge of national recognition and comes with $25,000 and a two-week residency.

Most recently, Ferrentino has been in residence at London’s National Theatre, where she was commissioned to write the book and lyrics for a new musical, and took part in casting and design sessions for a British production of Ugly. She’s floored that it’ll be staged in a theater with 900 seats (the Hertz has 200).

AT THE CENTER of Ugly is Jess, a combat veteran who returns to her Florida home after a third tour in Afghanistan. She’s disfigured from severe burns that leave her in constant pain and turns to virtual reality for therapy — or, more precisely — to distract herself from the agony.

Ugly juxtaposes Jess’ hopes and prospects with the declining possibilities of her hometown. The play took root a few years ago, when Ferrentino was applying to Yale.

Right after her Yale interview, she recalls, she was on a train, reading, when she came across a GQ magazine article. It profiled a soldier, a burn survivor with chronic pain, who was a perfect candidate for SnowWorld, the pain-distracting virtual-reality treatment.

Ferrentino was overcome with “that feeling of needing to run but being trapped on a train.”

Ugly Lies the Bone, which has been described as haunting and hopeful, had its world premiere last year at New York’s Roundabout Underground, with Mamie Gummer (Meryl Streep’s daughter) as Jess.

Ferrentino considers herself a sentimental and nostalgic person “who hates sentimentality and nostalgia.” Her central concern when writing a play is, “Does it speak to America here and now, and is it a story I can personally crawl inside?”

She’s interested in “stories of people fighting to carve out a place for themselves in the world, to find and redefine home.”

Most of her plays are autobiographical in some way, she says, because you can take the girl out of Florida, but “oh, you cannot take the Florida out of the girl.”

“I pretend to be a two-master’s-degrees-toting playwright but would always rather be in cutoff shorts, flip-flops, saying ‘y’all’ and adding ‘ass’ to the end of words.”

Her home was fast, bright and “gloriously” tacky, a culture dominated by water sports, where people hunt alligators, fish for sharks (“horribly gruesome”) and speed through muddy swamps to get their trucks good and dirty.

Ferrentino creates people who speak their minds. Her characters don’t lie or cover things up. It’s more like, “Here is the truth about me and what I think of you, so we can move on.”

She’s much the same. 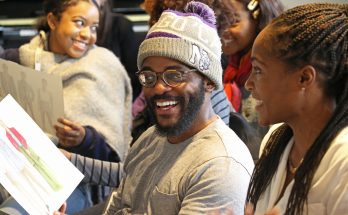 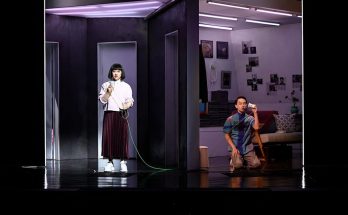 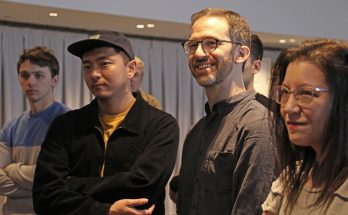 More human than us: How “Maybe Happy Ending” robots show us the miracles in the mundane