ON THE SURFACE, Virginia Beach looks like any number of coastal communities that line the Eastern Seaboard. 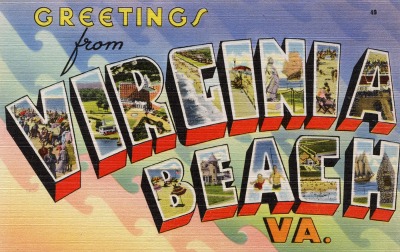 The busy beach town has three military bases, two universities and myriad high-rise office buildings. There are countless oceanfront hotels and restaurants along what is listed in the Guinness Book of Records as the longest recreational beach in the world.

But Virginia Beach also has options for travelers seeking an experience that goes beyond relaxing on the beach. There’s an impressive amount of green space here, historical landmarks and outdoor recreation, not to mention a growing foodie scene that benefits from the city’s prime location at the mouth of the Chesapeake Bay.

A few things to know before you go:

Back to the beginning

To understand the area’s significance in American history, start your visit at First Landing State Park, a National Natural Landmark that encompasses 2,888 acres of prime real estate on Chesapeake Bay.

The Visitors Center has a small museum that explains the “First Landing” name. It was here, on the shores of Cape Henry, that captain Christopher Newport led three ships on behalf of the Virginia Co. They landed April 26, 1607, and the Colonists aboard those ships founded Jamestown, the first permanent English settlement in North America.

Knowing this helps you explore the relatively pristine park (including 1.25 miles of beachfront and 19 miles of hiking/biking trails) with fresh eyes. Imagine the early settlers exploring the evolving ecosystems — from beach and dunes to a maritime forest, tidal marsh, freshwater ponds and cypress swamp — with a sense of wide-eyed wonder at the raw, untamed beauty of it all.

The park draws more than a million visitors a year, offering cabins and campsites, boating, fishing, swimming, natural history programs and more. This is a nature lover’s playground not far from a humming city.

False Cape State Park is equally historic, but more remote, sharing the Currituck Banks Peninsula on the North Carolina border. You’ll only get there by hiking, biking or boating from Back Bay National Wildlife Refuge, which ensures plenty of elbow room away from late summer crowds.

False Cape was named for its resemblance to Cape Henry when seen from the sea. British ships sailing to the New World often mistook False Cape for Cape Henry and ran aground in shallow waters, earning it the nickname “the Graveyard of the Atlantic.”

Survivors built the Wash Woods community here in the late 16th or early 17th century. Though long since in ruins, the village had a church, homes and other structures built from cypress that had washed ashore. By the early 20th century, waterfowl had drawn hunters. Today’s Wash Woods Environmental Education Center was yesterday’s hunting clubhouse.

The old land & the sea

Virginia Beach residents have built their lives around the 248 square miles of water that surrounds them for centuries. They ate fish from Chesapeake Bay and oysters from the Lynnhaven River. Fishing, agriculture, shipping, military defense and tourism industries benefit from the location.

Some 150 rivers and streams flow into the Chesapeake Bay’s 64,299-square-mile drainage basin, home to 300 species of fish, shellfish and crabs ranging from tiny Atlantic menhaden and striped bass to massive Atlantic sturgeon, plus bottlenose dolphins, sea turtles, manta rays, and sharks and whales. The Bay is famous for its blue crabs, clams and oysters, for which both locals and visitors clamor.

You’ll learn a lot about Chesapeake Bay during a tour with captain Chris Ludford, the Virginia Beach native behind Pleasure House Oysters. His oyster farming business is named for picturesque Pleasure House Point, which has been preserved as a 118-acre natural area (tidal marsh, sandy shores and maritime forest) along Pleasure House Creek and the Lynnhaven River.

His sweet, floral-flavored oysters are reminders of a time when the area’s legendary seafood was essential sustenance. Today it’s more of a luxury, part of a food scene that’s enhancing Virginia Beach’s reputation as a travel destination. From the laid-back, farm-to-table vibe of the Bay Local Eatery to the award-winning upscale menus at The Cellars (in the basement of Church Point Manor B&B, formerly an 1860s farmhouse) and Terrapin Restaurant (our favorite), the seafood is one of several things that’ll convince you this historic coastal community is worth a road trip.

Oenophiles might be lured by the Chesapeake Wine Trail, which offers tastings, tours, gift shops, glasses and bottles of wine at 10 locations.