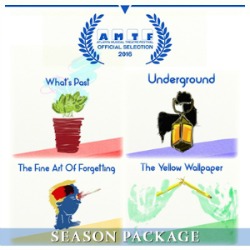 The inaugural Atlanta Musical Theatre Festival, running Aug. 1-2, introduces four new shows to metro audiences. A festival pass includes tickets to each. They are: Underground, a slave story set in 1850 and told through song; The Fine Art of Forgetting, a contemporary musical about the life choices of one overburdened woman; The Yellow Wallpaper, based on the 1892 short story of the same name by Charlotte Perkins Gilman and regarded as an important early work of American feminist literature; and What’s Past, which follows a pair of siblings  through time and memory as they unravel the mystery of their parents’ death and their own identities. Performances are at Synchronicity Theatre in Midtown and Actor’s Express in West Midtown. AMTF is modeled after the long-running and hugely successful New York Musical Festival.

* BUY HERE. ALL TICKETS WILL BE HELD AT WILL CALL