Little Five Points in the place to be heard and seen this week with a Tuesday music event sponsored by Little Five Arts Alive, which includes Horizon Theatre, and a “Holler Against Hate” gathering on Wednesday at 7 Stages. Both events are free and open to anyone who wants to drop by. The details:

TUESDAY. Activities happen in L5P’s Findley and Davis plazas, near the intersection of Moreland and Euclid avenues. Make Music Day is an international movement that seeks to have live music played around the world on the summer solstice. It originated in France. All are invited to show up, play, listen and interact. 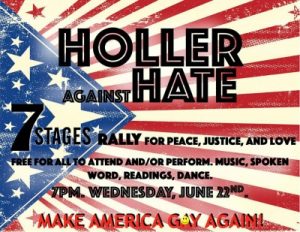 7 Stages‘ “Holler Against Hate” is described as a rally for “open expression, listening and performance” as a response to the June 12 shooting at Pulse nightclub in Orlando, Fla., that left 49 people dead. The gathering is intended as a public “standing against hatred, violence and ignorance” and as a way to promote “peace, justice and love.”

The rally begins at 7 p.m. Wednesday and is free for all to attend and/or perform. Expect music, spoken word, readings and dance. Details HERE. 7 Stages, a 37-year-old theater company and L5P mainstay, is at 1105 Euclid Ave. N.E., and conveniently conjoined with Java Lords, a coffee shop and bar.