A WHIZ OF A 'WIZ' — Encore Atlanta
Skip to content
ShareTweetShare

A WORLD WITHOUT The Wizard of Oz? Now, that would be a horse of a different color.

Flying monkeys. And your little dog, too! You can hardly go through a day without hearing a reference to the 1939 Judy Garland movie, says Michael McGoff, associate director of the national stage tour. “It’s that much a part of our zeitgeist. It’s a very American story. People return to it again and again because they want to see their story.”

That story, of course, centers on Kansas farm girl Dorothy Gale, swirled up from her sepia-toned home of simple folk and vast plains to a Technicolor dreamland somewhere over the rainbow. She dodges danger, defeats the Wicked Witch of the West and finds friendship with the Scarecrow, Tin Man and Cowardly Lion.

Thanks to the marvels of theater-tech wizardry, Dorothy’s onstage adventure now unfolds as an elaborate spectacle, promising more wow and pizazz. The seven-truck tour has evolved since 2011, when it opened in London amid great fanfare, partly due to six new songs from Andrew Lloyd Webber and Tim Rice (Evita, Jesus Christ Superstar).

The tunes from the movie are here, too, but Webber-Rice have given the Wicked Witch of the West her own song, titled “Red Shoes Blues.”

Scenic and costume designer Robert Jones has created a neon Oz in a more contained space than a Hollywood sound stage.

Casting short actors helps enhance the illusion, too, and heightens theatergoers’ sense “that Oz is its own real world. It may even suggest that this whole thing wasn’t just a fever dream. We are given the idea that this story can continue, and people who know and love Oz are happy to learn that there’s the possibility of more to the story,” says McGoff.

Audiences come to The Wizard of Oz “wanting to be transported,” and McGoff hopes the traveling show delivers. It combines lighting effects with IMAX-size video projections to pump up the magic and provide a cinematic experience, almost like being caught up in the movie.

Remember how Dorothy spots a cow while she’s twirling in the twister? That flying cow is here. “We try to give the audience a multi-sensory roller-coaster ride that wraps you in and then BOOM — there you are.”

McGoff admits to having a soft spot for this tour’s Dorothy (Sarah Lasko). He was in the room when the University of Maryland grad auditioned. The creative team eventually agreed with him.

“Sarah had it all,” he says. “She can project the youth and naiveté of the Dorothy we expect, while also suggesting the feminism” that a production today demands.

Dorothy is both tomboy and young woman but should never be seen in a sexual light. The pigtailed teenage heroine is a born leader, yet the mature actor required must not respond as an adult. She must be genuinely scared of the Wicked Witch, yet find the gumption to challenge her. 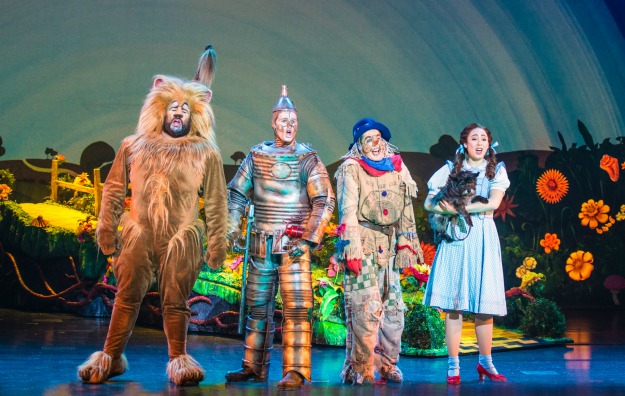 Lasko, who’s always had a deep love for Dorothy and The Wizard of Oz, will have played the role more than 150 times by the time Atlanta audiences see her. She has earned nice reviews along the way, being described as “plucky” and “winsome” to “just as endearing as Judy Garland.”

Any actor who tries to re-create what Garland did in the movie “is going to fail because she is so untouchable,” Lasko says. “Bringing my own personality and perspective to the role every night is important and necessary for the audience.”

Lasko and Dorothy share similar truths. Both have big dreams and have traveled far from family to pursue them. And, like Dorothy, Lasko has discovered along the way “that family and community are the most important things in life.”