Performances of the the Alliance Theatre’s “Disgraced” begin Jan. 27 and run through Feb. 14. On the mainstage.

THE ALLIANCE THEATRE  begins 2016 with one of the boldest and most provocative plays in contemporary drama: Ayad Akhtar’s Disgraced, winner of the 2013 Pulitzer Prize for Drama. 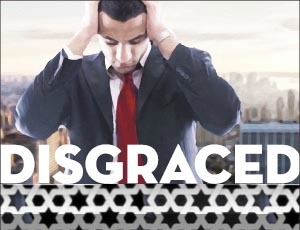 With 18 productions, Disgraced is the most popular play in the country this season and will soon be an HBO movie. It explores Islamophobia and the identity struggles of Muslim-Americans. Its author has been widely touted as an important playwright still very much on the rise, “a dazzling new voice in American theater.”

“Of course I’m always flattered if people say nice things,” says the Milwaukee-raised Akhtar, 45, “but I have to take it with a grain of salt. I’m just trying to do the best I can. I’ve been at this for a while and I hope to keep getting better at what I do.” He shared some other thoughts by phone from New York City, where he lives.

Q: You’re also an actor, a novelist and screenwriter. What particular pleasures do you find in writing for the theater?

A: At its best, there’s nothing like it. The audience is gathered for the experience of publicly living through a story with live actors. It sort of reawakens in an unconscious way our roots and ritual, and I think that it binds us together more closely. It’s a much more galvanizing experience than the movies because you are experiencing something with a community.

Q: Disgraced builds to its boiling point during a dinner party. Why is that setting such a successful device?

A: It’s a natural circumstance that people believe. It’s a setting that gathers people who might otherwise not be in the same room. It allows for dramatic circumstances to happen in real time. Preserving the unities of setting and time, audiences love that.

Q: What writers have been most influential for you?

A:  It’s really individual works that have most affected me. Arthur Miller and All My Sons has been a huge influence. Others that have stayed with me include David Mamet’s Glengarry Glen Ross and Ibsen’s Hedda Gabler. I’ve learned a lot from a lot of different writers: from Woody Allen’s earlier work to the “Seinfeld” TV sitcom.

Q: Disgraced went through many drafts and rewrites. You’ve described it as “four years of constant writing.” Can you give an example of a significant change that was made along the way?

A: Between Chicago and New York I added a whole new scene — the second scene in the play, when Emily is reading The New York Times.

A: I find it very helpful to see the play in front of an audience. You get a sense of what works and what doesn’t work. Tony Kushner recently said that he was finally done rewriting Angels in America [his 1993 Pulitzer-winning play]. So sometimes, yes, it’s hard to feel you are done. Rewriting is my favorite part of the process. I think that’s because I see the play as a living thing, not just a text.

Q:  You consider Disgraced to be a  “deeply American” play. How so?

A: We are witnessing the deterioration of public speech every day. We see it on the news. We see it everywhere. What people are saying about themselves, about others. Four or five years ago, you could never have imagined that public speech would become degraded to the extent that it is on the news every night. That’s the world the play is embodying. That’s the world today.

So the play turned out to be very prescient. When I was writing it, I wasn’t even aware of where we were headed as a nation. Issues of identity and race and Islam and politics have become deeply nasty conversations, and yet you can hear them at the local coffee shop right now. In an odd way, I can’t take credit because it’s just something that happened. Sometimes there is a deeper intelligence at work that eludes your own intelligence.

In a way, the play itself has led the way. Disgraced ended up being a play about a world that was coming into being. It seems like the play has finally found its time. This is the moment the play is addressing.

Q: Before the action in Disgraced begins, the script stipulates that the pace needs to be “allegro con brio,” meaning “light and bold.” Why?

A: The text of the play is something of a musical score. It seems to work best when actors are aware that pacing, like in music, matters a lot.

Q: You wrote this play as an “entertainment.” Can you explain that?

Q: Do you think that something can be entertaining while also being heavy and politically charged?

A: I think Disgraced is trying to do that. I don’t know if it succeeds, but it is certainly trying. All of my works feel like they have their own personalities and their own destinies. Each resists my interference and seems to take on its own life. The best I can do is support the life that a play has chosen.

Q: Do you believe to any extent that no one can escape their heritage, their original identity?

A: I don’t know what I believe, but I know that’s what the play appears to be suggesting.

Q: One character says that there’s “so much beauty and wisdom in the Islamic tradition.” What do you wish that more Americans understand about Islam?

A: The play presents a number of points of view about Islam and the question of Islam. I don’t have a point I’m trying to make, nor a desire for anyone to understand anything in particular about Islam.

Q: What ideas or themes about the Muslim-American experience do you want to explore that aren’t necessarily addressed in Disgraced?

A: All of my work in the past eight years has dealt with human comedy or the American Experience from the point of view of American Muslims. I think the issues I’m writing about are those that most communities and most people are dealing with. I certainly don’t believe the play covers all the ground. Disgraced is one of four plays and one of seven overall works. Together, all of that will be an expansive picture of Muslim-American life.

[SEE WHAT ELSE AKHTAR HAS BEEN WORKING ON]

Q: Disgraced is being staged all around the country. Does it take a toll to constantly  talk about a play you wrote several years ago when you’re trying to create new work?

A: It’s what they call a high-class problem. One should wish for such a problem.

Q: For years you denied your Islamic heritage to an extent. Why did you choose to use it as a subject for your work?

A: I was trying to define myself in opposition to my family. I was imagining that I was whatever I wanted to be in the great American tradition — but nothing like what [the main character] Amir is doing. People assume that I am Amir, and that is a function of not knowing my work. I have many strongly articulated characters who represent contrary and contradicting positions and experiences.

Q: How do people relate to Disgraced when they know very little about Islam?

A: It depends on what they think about it. Even if they don’t know very much, I think the play leaves people with the freedom to think whatever they want. They can hate or not. They can see a bigger picture if they want to. One reason the play has done well is that it doesn’t force you to think anything in particular. It gives you a powerful experience, but it doesn’t tell you what it means. It leaves you to figure it out.

Q: Might you say that Disgraced holds a mirror up to all of us, up to the walls we put up around ourselves for protection?

A:  I don’t know. Some audience members might say that and others would disagree with that. I don’t know who’s right.

[SCENES FROM “DISGRACED” ON BROADWAY AND MORE WITH AKHTAR]