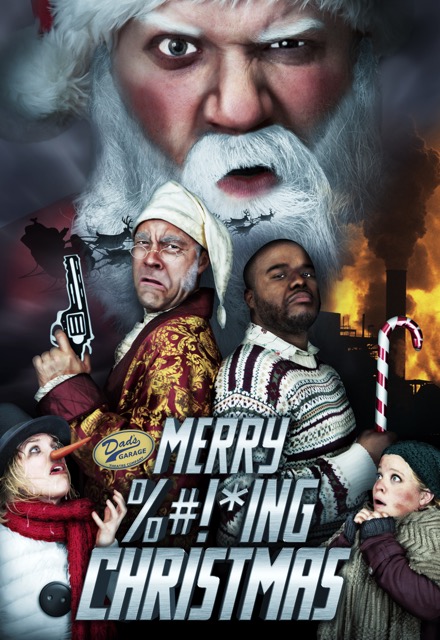 MOST OF US KNOW someone who’s had it up here (clenched teeth, flaring nostrils) with holiday joy, shimmer and schmaltz. They wince at another round of Claymation Rudolph and Charlie Brown and his pathetic tree. They’re just plain Nutcracker’d out.

These are the sad souls for whom Merry %#!*ing Christmas tolls. (Feel free to substitute  Merry Bleeping Christmas).

This all-new Dad’s Garage Theatre Company show is the work of Scratch, the Canadian writing-performing team of Kevin Gillese and Arlen Konopaki. It’s billed as wild, wacky and much more naughty than nice. Gillese (pronounced GUH-leese) is the artistic director at Dad’s.

Scratch is also the duo’s trademark brand of improvisation, known for its wit and brains as much as its lunacy. Actors play multiple roles in a Scratch show, which always contains three outrageous story lines that are on something of a collision course.

In the fully scripted Merry Bleeping Christmas, the main stories involve an evil Santa with weapons of mass destruction, a partly redeemed Ebenezer Scrooge zapped to the future to save Christmas, and the loneliest orphan in the world. There’s also an androgynous Frosty the Snowperson and a miserable single dad.

The formula involves musical montages and actors jumping and spinning in place to signal transitions. Gillese and Konopaki developed the brand in 2004 and then performed it across North America, Europe and Australia. In 2009, Gillese joined Dad’s, but he continues to write with Konopaki, now a film and video director in New York City, and Dad’s dabbles regularly in Scratch fare.

This is the second consecutive holiday season in which the Atlanta funsters are doing an original show on the Alliance’s Hertz Stage. Last season’s It’s a Wonderful Laugh whisked audiences to Bedford Falls, with each audience calling upon the actors to improvise characters designed to throw the plot off course for George Bailey and Co.

“We’re just very happy to be invited back,” Gillese says. “We wanted to do something full-on this time, rather than a show that relies on improv.” As co-writer and director of Merry Bleeping, Gillese promised Alliance artistic director Susan V. Booth one thing, that “it would be funny and good.”

It’s crucial to the continued success of Atlanta’s theater scene, he says, “for theater companies with different aesthetics and sensibilities to be working together.” The 20-year-old Dad’s is known both for its outrageous scripted productions and for an endless stream of improv shows.

Keep the kids at home

With It’s a Wonderful Laugh, the Dad’s team attempted to tone down its usual racy mischief. They went with the title Merry %#!*ing Christmas this time, Gillese says, “to better let everyone know exactly what they’re getting themselves into.” There’s no gory violence or nudity, but expect plenty of cursing and R-rated content.

“We get to flip a lot of Christmas stuff on its head,” he says. “We like to reverse expectations.”

Some of Merry Bleeping’s material comes from Scratch’s time on the road. “Because we were doing improv, we were churning out all of this new material,” Gillese says. “After each show we would fill up these little notebooks with jokes, plots and other things.”

Is it hard to stick to a script when you so often play among the improvisers? Not really, says Dad’s regular Mark Kendall. His Bleeping roles include that miserable single father.

“The scripted shows are a nice change,” he says. “We  know each other well. We have great chemistry.”

“Kevin and Arlen are great writers,” Kendall says. “Their writing style is fast-paced and filled with great physical stuff. All the characters have arcs, so you get that nice balance of building a character that has somewhere to go.”

And there’s real meat. “Amid the heart, humor and hilarity,” he says, “there are real stakes, strong relationships going on, characters who care about each other.”

If you happen to love Christmas and all its trimmings, fret not. You’ll get your fix. Just don’t tell those upstairs seeing A Christmas Carol.