“Elf the Musical,” presented by Broadway in Atlanta, plays the Fox Theatre on Dec. 2-6.

“WE NEED a little Christmas, right this very minute …”

So goes a song from a certain show that landed on Broadway nearly 45 years before Elf: The Musical, the bright and brassy 2010 show adapted from Will Ferrell’s hit movie. 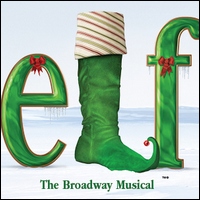 Can you name that other show? (See our pop quiz to test your knowledge of Christmas songs from musicals.)

When a live production revolves around Christmas, the audience appeal, it seems, lasts throughout  as long as November and December.

For Ken Clement, it’s lasted a little longer. He’s in his third tour of eight shows a week for eight weeks. By the time he welcomes Fox Theatre audiences —  as Santa does so to open the show — Clement will have ho-ho-ho’d for about 125 total performances.

“I consider myself the opening-act comedian, the way I come out and chat with the audience,” Clement says. “I get to warm them up for all the singing and dancing that’s about to happen.”

To get into character, Clement need only to sit in the makeup chair. “They put that white beard on me and, suddenly, I am Santa. It’s so good even up close, it seems real.” He notes that he does not require padding beneath his costume.

Santa Claus narrates and bookends Elf, a change from the 2003 movie, which was narrated by Bob Newhart’s Papa Elf. But the role remains secondary to the central action. Like the wizard in Wicked, Santa in Elf is a small, yet essential role.

Could there even be a Christmas musical without a Santa? Maybe, but not when the story follows the naive orphan Buddy, a grown-up human raised by elves, who travels from the North Pole to New York City to seek his real father.

Clement, 50, lives in South Florida, where he also spent his childhood and knew one magical Christmas after another. “We didn’t have snow, and I didn’t grow up rich or even well-off. But we would make Christmas very special, and we made it about more than the presents.”

It’s a bit ironic that he’s playing the most famous giver of gifts here, because in his TV and work, he most often plays the heavy. As in the bad guy.

His Santa has sass and acts like a regular Joe. Fans of the 2003 movie might recall Ed Asner’s dry-humored Santa. George Wendt originated the role on Broadway, withWayne Knight as Santa for a 2012 New York remount. Both sitcom actors wrapped their twinkle in wry.

“He’s more of a beer-and-pizza Santa,” Clement says of his iteration. “My Santa owns 364 Hawaiian shirts. He’s watching football, building toys. He’s kind of like the funny uncle who pulls the quarter from behind your ear.”

Elf: The Musical also has been called a mashup of Shrek, Big and Miracle on 34th Street.

That’s a compliment, Clement says, “because all three of those are so sharp and so wonderful — and all have something to say,” as does Elf, which nudges folks to believe in you-know-who and embrace their “inner elf.”

Your inner elf, says Clement, “is that feeling you get at Christmastime. It’s all about love. Elves love to be happy and love to give. And that shouldn’t be just one day a year.”

We had to ask this guy what he most wants for Christmas. Typical of Santa, he rattled off what he wants for the others in his life.

“I’d like my sister and brother-in-law to find the right house for themselves in Florida. I want my mom’s handicap to drop so that she can improve as a golfer, because that would make her happy. I’d like to book a part as a regular or recurring role on TV, just to make my agent happy.”

Anything just for you, Santa?