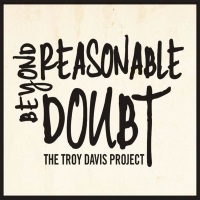 In this, its second full season in a permanent Midtown home, Synchronicity grows its Bold Voices series of plays for adults from one to three shows and adds a curated evening of shorts by women filmmakers. Its popular Family Series remains at two productions, both musicals based on children’s books. The company, which focuses on smart, gutsy, bold theater and often does plays that uplift and amplify the voices of women and girls, was nomadic for its first 16 seasons. It can now be found at 1545 Peachtree St. N.E. in the Peachtree Pointe building.

Synchronicity commissioned and developed Beyond Reasonable Doubt: The Troy Davis Project by Decatur playwright Lee Nowell. It’s described as an investigation of our divergent and deeply held beliefs about the death penalty. Davis was convicted of killing a Savannah police officer and executed Sept. 21, 2011, despite much debate about his guilt or innocence. Partnerships, special events and post-show conversations will all be part of the run.

The multi-award-winning Gunderson describes her piece, The Heath, as a “part play, part personal essay and part banjo memory musical.” She traces the life and lineage of her grandfather, a World War II veteran who battled dementia, alongside the myth of King Lear, who grew old, went mad and wandered out onto the heath. Synchronicity staged Gunderson’s Southern revenge comedy, Exit, Pursued by a Bear, in 2011.

The company continues its outreach work through Playmaking for Kids and the acclaimed Playmaking for Girls program. Details, tickets HERE or at 404.484.8636.

The season, in chronological order:

A YEAR WITH FROG AND TOAD. DEC. 4-27. Family Series. Frog and Toad get hopping mad at each other sometimes, but their friendship sees them through a year of adventures, from growing seeds to sledding down a hill at breakneck speed. Based on the classic children’s books by Arnold Lobel. Winner of the 2007 Suzi Award (Atlanta’s professional theater honors) for outstanding musical. Book and lyrics by Willie Reale, music by Robert Reale.

FANCY NANCY THE MUSICAL. Feb. 19-March 19, 2016. Family Series. Fancy Nancy and her best friend can’t wait to star as mermaids in the school ballet. But when someone else is cast, Nancy gets stuck playing a tree. Can she bring her special flair to this small role and stay true to her philosophy? Based on the books written by Jane O’Connor and illustrated by Robin Preiss Glasser. Book and lyrics by Susan DiLailo, music and lyrics by Danny Abosch.

BEYOND REASONABLE DOUBT: THE TROY DAVIS PROJECT. April 8-May 1, 2016. Bold Voices. World premiere. Nowell’s drama explores conflicts surrounding the Troy Davis case through the diverse experiences of her characters — a burned-out activist, her corporate lawyer husband, a civil rights veteran and her college-age grandson, among others.

THE HEATH. May 20-21, 2016. Bold Voices. This one-woman piece by Gunderson (Silent Sky; EMILIE: La Marquise du Châtelet Defends Her Life Tonight; I and You) grapples with mortality, madness and regret while celebrating life, memory, music and the power of a good story.