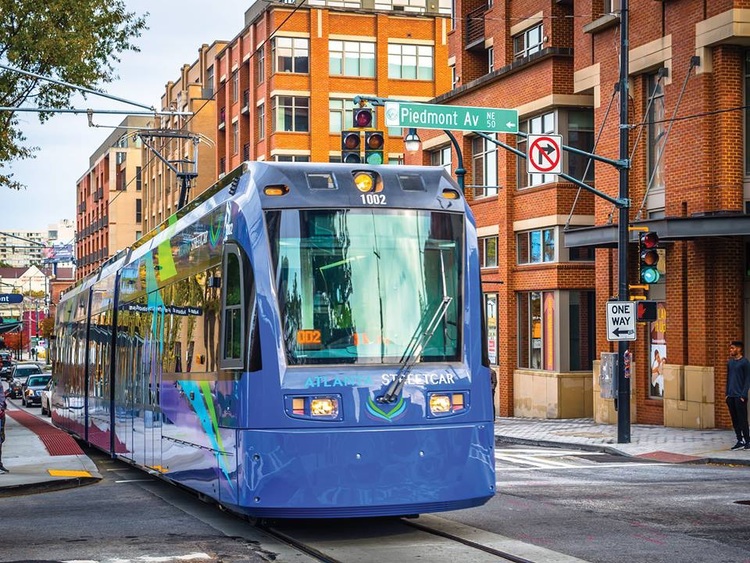 DOWNTOWN ATLANTA’S NEWEST FORM of transit is also one of its oldest: The long-awaited, much-delayed Atlanta Streetcar began running its loop in December, harking to the late 1800s and early 1900s, when city transit operated on streetcar and trolley bus systems. This new rendition is sleek and modern, and a spectacle for a city with iffy public transit, but don’t go looking for any San Francisco-style cable car ambience.

THE RIDE IS WOVEN directly into the bar and food culture of Edgewood Avenue (Sweet Auburn Curb Market, bars like MOTHER and Sister Louisa’s Church of the Living Room & Ping-Pong Emporium). The plan was to offer free rides for its first three months, but not long ago Mayor Kasim Reed decreed rides would be free through the end of 2015.

I decided to try the streetcar out as a destination, planning to jump on MARTA at North Avenue, take the train two stops south to Peachtree Center, and then board the main event, the purple-green bottle-nosed streetcar.

These plans were derailed, literally, by MARTA maintenance. Let that be a warning to you, too. When I finally get to Peachtree Center, I realize it’s a particularly bustling weekend downtown, join the long queue for the streetcar and step aboard.

It’s standing-room-only inside, and I grasp for a silver bar above. The streetcar, which has had plenty of critics, appears clean and contemporary, crowded with wide-eyed eventgoers. Children press up to the windows and exclaim, “Look at that!”

This won’t be a leisurely tour of downtown history, though, not without a seat. And, since the streetcar shares lanes with cars, the stop-and-go traffic makes enjoying the ride on your feet a comical test of balance. Tears of laughter appear as I jostle into my friend, more focused on staying upright than looking out the window.

FOR FAMILIES, it’s an instant urban experience in a friendlier-than-MARTA format, slightly more of an event than the underground getting-there of a subway train.

“The Atlanta Streetcar can be a fun outing for families. It’s a cheap and easy way to explore what downtown has to offer,” says Patrick Sullivan, taking all four members of his family on a ride from Centennial Olympic Park to Woodruff Park. His son didn’t mind the crowd. “I was surprised that it was packed with people,” says 6-year-old Gerard. “It can hold a bunch of people.”

These crowds seem to prove that the streetcar will suit the needs of downtown tourists. For long-term Atlantans, the old-school appeal may promise a resurgence of out-and-about activity downtown.

“Trolley lines once crisscrossed the entire city, so it’s exciting to think that the face of the city could change again and we’d see more people out for an evening, or even commuting on the streetcar,” says frequent user Scott Morris. So far he’s tested it as part of his commute and as a convenient ride to meet friends for dinner. He’s even developed a bar crawl along the streetcar’s 12 stops.

ONCE THE STREETCAR whizzes past the SkyView Atlanta Ferris wheel and the Tabernacle, I remember a time several years ago when I was a Georgia State undergrad and two German tourists asked how to reach the World of Coca-Cola. I pointed the way through the complicated triangular districts of downtown and hoped they’d be OK. The streetcar eliminates that confusion for visitors and connects some of the city’s best-loved destinations for all of us.

As the streetcar network expands, it may change the shape of Atlanta. “In the long run,” says rider Sullivan, “I believe the streetcar will prove to be an integral part of downtown’s transit system and will spur much needed infill development along the routes.”

For now, Atlanta’s latest transit has that predictable pull of old and new. Nora Sullivan, age 5, puts it this way. “I liked it because you can look out at the city and see different places.”

Hally Joseph has an M.F.A. in writing from SCAD and has been published in Encore Atlanta and BurnAway Magazine. Her essay “An Open Letter to the Man Who Stole My Father’s Hash Brown in a McDonald’s in Panama” was published in Atticus Review. She talks writing and reading on Twitter as @hally_joseph.

View all posts by Hally Joseph →