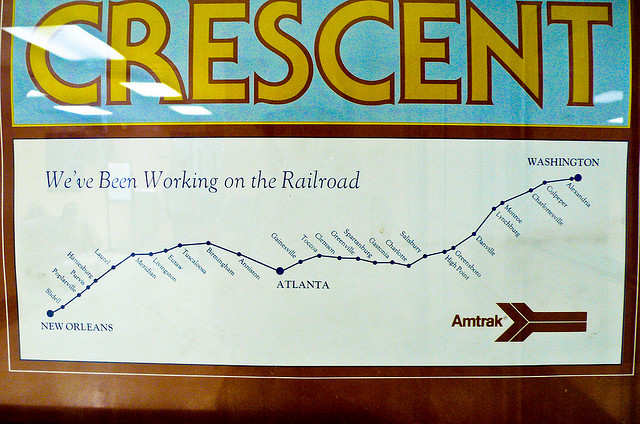 WHEN LOUIS ARMSTRONG recorded “Do You Know What It Means to Miss New Orleans” some 68 years ago, he couldn’t have conceived what his beloved Crescent City would become.

Back then, Satchmo could croon about “moss covered vines,” “moonlight on the bayou” and “magnolias in bloom” in a classic tune that has been covered by such  greats as Billie Holiday, Rosemary Clooney, Harry Connick Jr. and the Preservation Hall Jazz Band.

But, times have changed.

Today the most resonant music emanating from New Orleans is a hyper-erotic, anti-social genre known as “bounce,” pioneered by a 7-foot-tall gender-bending personality known as Big Freedia. He/she has his/her own reality show on the Fuse network. And, there’s still much curiosity about the fallout and recovery from 2005’s Hurricane Katrina. 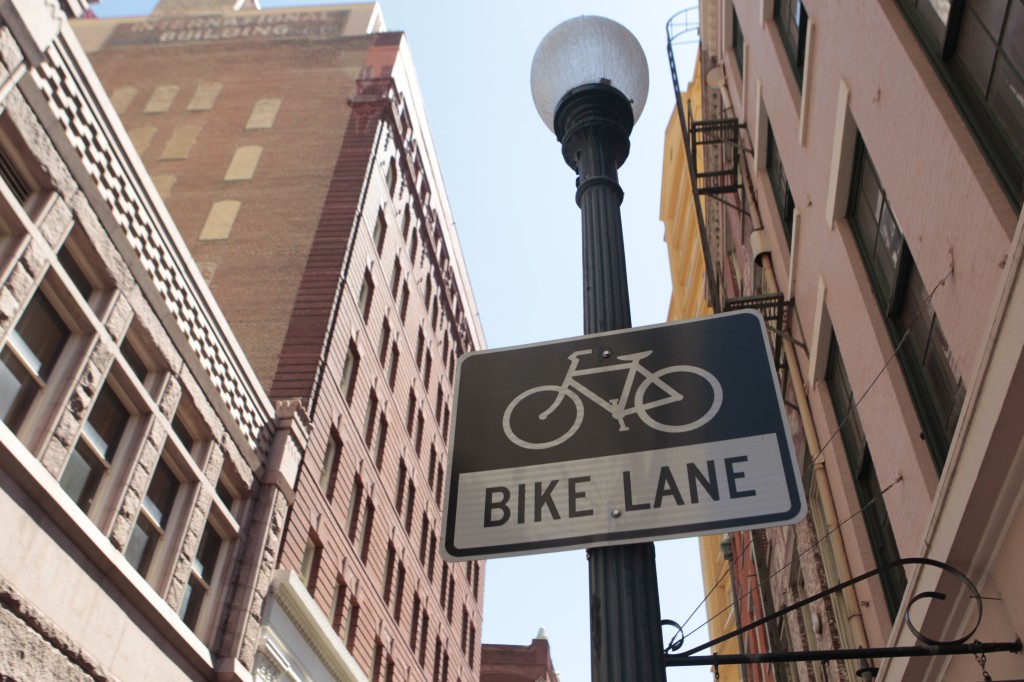 You’ll hear another sound, too: the clackety-clack of Amtrak’s Crescent line, perhaps the best way to ease into a trip to New Orleans, where old-school charm rubs up against modern pragmatism. The smooth, rhythmic sway of the train does wonders with those pesky hangovers some French Quarter revelers carry home as a souvenir.

Whether you normally travel solo, in groups, with kids or senior citizens, a train ride to New Orleans feels less stressful than getting there through the air.

THE ORIGINAL CRESCENT LINE started chugging its full-service dining rooms and sleeper cars on a 1,377-mile arc from New York City to New Orleans — 30 hours one way — in 1891. When Amtrak took over the rail line, one of its missions was to return the trip to its bygone glory.

Over its full length, the Crescent stops in Philadelphia, Washington, D.C., Charlotte, N.C., and Atlanta as it journeys to New Orleans. The Atlanta-to-New Orleans leg is a 12-hour trip. If you’re not in a hurry, it’s a refreshing and reflective way to travel.

Crowds at train stations are much smaller than at airports. The pace of boarding is less rushed and the exertion involved minimal. You actually lay eyes on the stewards loading your bags. And for a nominal fee ($5-$10), travelers who want to see New Orleans on two wheels can carry their bikes on board like luggage. 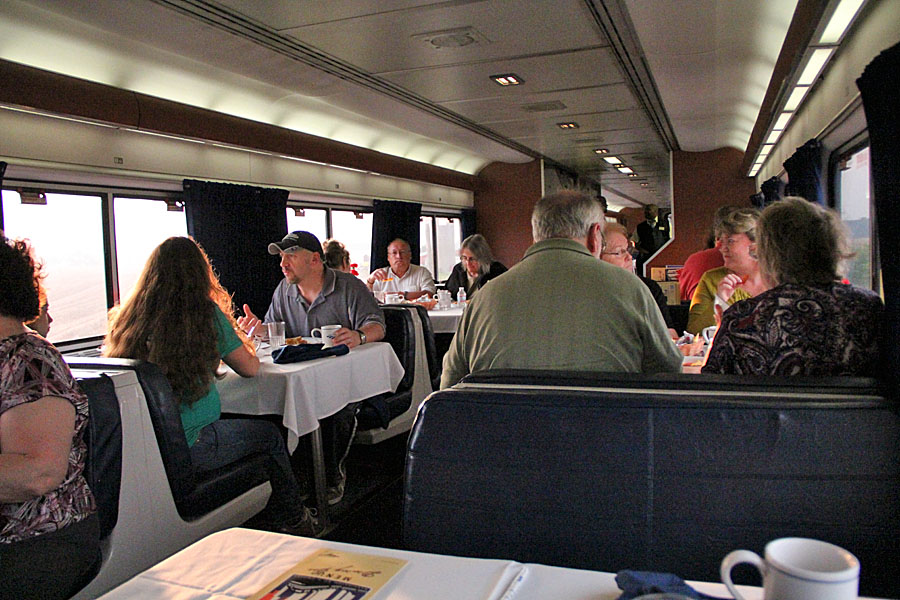 Amtrak tickets to New Orleans don’t sell for peanuts the way they do through airline discounters, but the amenities on the Crescent far surpass a complimentary pack of nuts and a cup of coffee or Coca-Cola.

The scenic route is just that — a meandering trip through the remnants and reformation of the Old South. Below the clouds, chugging along slightly below highway speed limits, it’s clear to see how far Dixieland has come and how far it has to go.

The fares ($69-$1,000) depend on your choice of dates, departure time and seating arrangements. 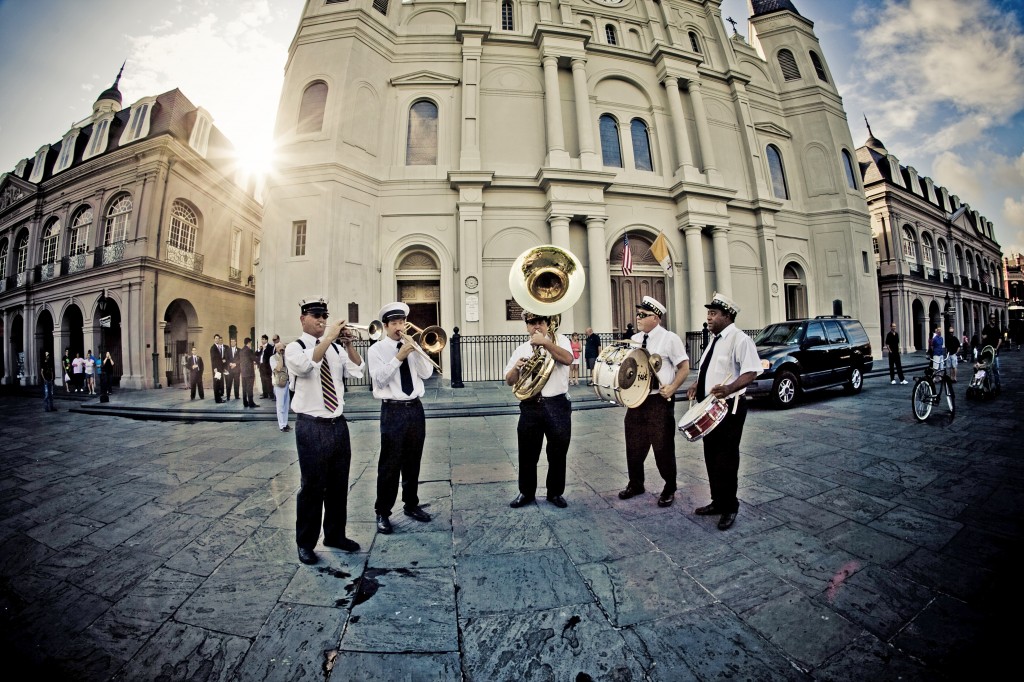 SO CLIMB ABOARD, then relax. Unless you have strong, private Internet connectivity, prepare to unplug for the duration. The Crescent line isn’t among the 21 Amtrak trains with free Wi-Fi and does not yet have a designated, staff-monitored Quiet Room either.

Why not avail yourself of the scenery and the food and drink available instead?

The kitchen staff on board serves breakfast ($7.50-$11.25 for scrambled eggs, Railroad French toast, omelets); lunch ($9-$12 for salads, burgers); and dinner ($15.75-$24.75 for steak, pasta, chicken and seafood entrees) from a set menu with as much attention as possible to riders’ personal preferences and dietary restrictions. Kids’ meals ($3.75-$7) are simple and comparable to fast-food fare.

Because Dining Car seating is limited, attendants go seat by seat to request reservations. In the first-come, first-served Lounge Car, diners can eat in or take out, perk up with caffeine or sip a cocktail. The Café Car is a fuss-free oasis for a quick snack or drink, including alcohol.

Riders needing a shot of courage heading into the Big Easy or some hair-of-the-dog heading home can get wine by the glass or half-bottle ($6 and $15), beer ($5-$7) and mixed drinks ($7 each).

Upon arrival, New Orleans’ levees break wide open for feasting, historical reverence, souvenir shopping and random debauchery. But beware. If you’re strolling Bourbon Street at night, heavy handfuls of stringed beads could come crashing down on you even if it isn’t Mardi Gras, and you didn’t bare your breasts to request them.

To be frank, New Orleans’ fabled French Quarter has the look, feel, sound and smell of a tourist trap patrolled by police on horseback and a crush of people testing their ability to laissez les bon temps rouler.

But the city’s best-known and under-appreciated attractions have something in common. They all invite you to follow your passions.