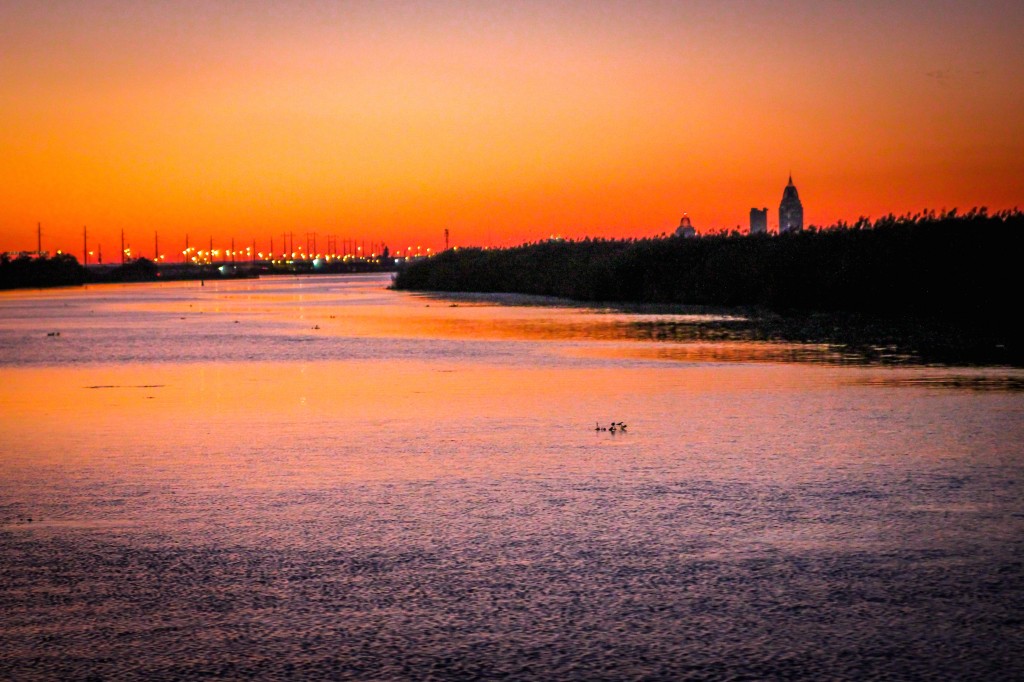 HELD EVERY YEAR on the day before Ash Wednesday, Mardi Gras (a.k.a. Fat Tuesday) in New Orleans is a cultural spectacle to behold, rivaled only by Carnival in Brazil and the Holi Festival of India. But as impressive and expansive as the Crescent City celebration is, Mobile, Ala., lays claim to America’s first Mardi Gras festivities.

The American tradition can be traced to the early 1700s. French King Louis XIV sent brothers Pierre Le Moyne d’Iberville and Jean-Baptiste Le Moyne de Bienville to what was then known as the Louisiane territory to defend the crown’s interests. The expedition entered the mouth of the Mississippi River and made its way upstream. By 1702, Bienville had founded the settlement of Mobile as the first capital of French Louisiana.

Settlers established the first organized Mardi Gras, a historically French Catholic holiday, a year later.  By 1711, Mobile residents had formed the Boeuf Gras Society, the first mystic society (or krewe) to present parades and masked balls. And in 1830, seven years before New Orleans held its first parade, the Cowbellion Raking Society grabbed bells and hoes and marched ceremoniously through downtown.

You’ll learn this fascinating bit of history in a film shown when you enter the Mobile Carnival Museum, which proclaims the Alabama town of 95,000 as “the Birthplace of Mardi Gras.” Museum volunteers (some are former Mardi Gras ball kings and queens) will quash any suggestion that New Orleans’ celebration can rival theirs, which includes social events in November, private balls on Thanksgiving and New Year’s Eve, parades and more balls in January and February, and revelry of one sort or another until midnight on Fat Tuesday. 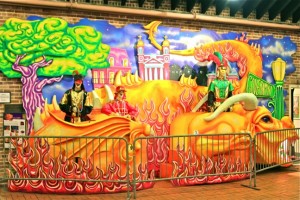 The Museum will immerse you in the evolution of Mobile’s Mardi Gras, starting with The Den, a warehouse-style space that holds old floats. The largest depicts a rake and scythe surrounded by vivid blues, greens and reds, mannequins dressed in masks and colorful costumes, and enough glitter and lights to make Lady Gaga jealous.

The Den, a nickname for the places krewes meet, features interactive elements where kids can play dress-up and adults can pose for photos as Mardi Gras royalty. It also honors the city’s history with a tableau dedicated to the Order of Myth krewe (established 1868), in which a costumed jester (Folly) and a skeleton figure (Death) chase each other around a pillar that represents Life.

These exhibits capture the pageantry of the public parades, but the halls beyond the Den give you a true taste of Mobile’s deep, rich Mardi Gras tradition. The major social organizations involved, divided racially into the Mobile Carnival Association (Caucasians) and Mobile Area Mardi Gras Association (blacks), largely comprise the city’s elite business and civic leaders. 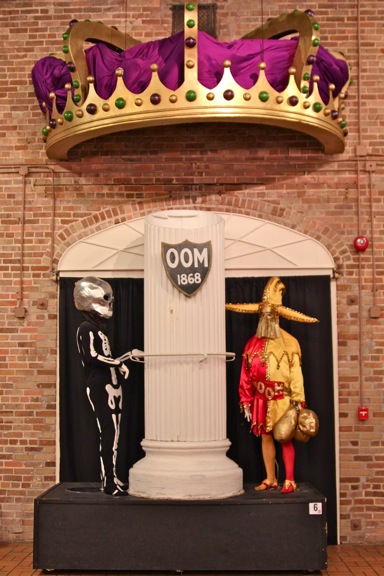 Children experience the world of masked balls at an early age, clothed in costumes almost as soon as they can walk. Once they reach eighth grade, they can become juvenile members of the royal court. Many coronation ceremonies are free and open to anyone with a ticket. The sons and daughters of prominent secret society members make up the “royalty,” an honor passed from generation to generation.

These traditions have an intriguing economic element, too. In days past, aristocrats wore masks so they could mingle anonymously with the peasants. Today the royal court can’t help but stand out, with elaborate capes, crowns and ball gowns that can cost as much as a new car.

If you’ve never been to Mardi Gras, the Mobile Carnival Museum will likely make you want to go. It also will introduce you to a 300-year cultural history that goes a lot deeper than colorful beads, costumes and debauchery.

The Mobile skyline, as seen from Mobile Bay, was photographed by Mary Gabbett. Other photos are from the Mobile Carnival Museum.