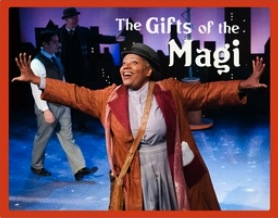 Christmas is the season of giving, but it’s not looking very merry or bright to Jim and Della, penniless newlyweds struggling in 19th-century New York City. In this musical based on O. Henry’s famous story, they plot to find each other the perfect gift, even though their prospects are pretty bleak. Gifts of the Magi returns to Theatrical Outfit for a third season with some very familiar faces, including Bernardine Mitchell and Glenn Rainey, and Nick Arapoglou and Caroline Freedlund as Jim and Della (who first appeared together in the 2012 version and now have marriage plans of their own). The show runs through Dec. 21.

* Purchase HERE. All tickets will be left at will call.