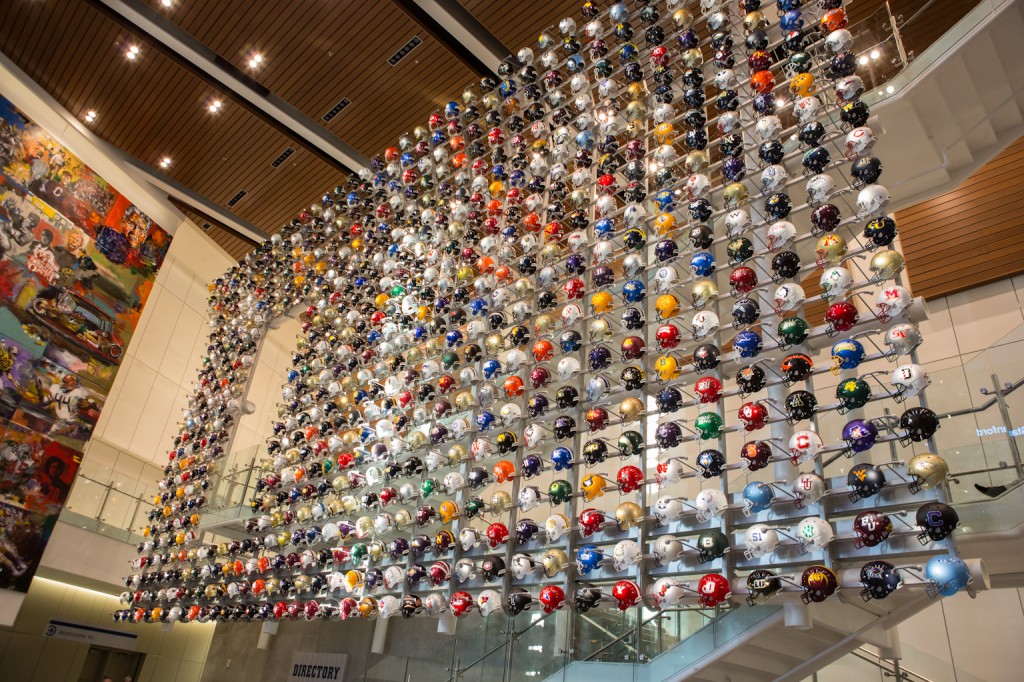 THE DOORS of the College Football Hall of Fame and Fan Experience open and two new guests (or “fans” as the All-Access Pass credentials call us) enter. One is a football fanatic; one is definitely football-challenged.

I’m the latter, convinced for years that “past” interference was a play retroactively noticed and corrected. So bringing my mega-fan brother, Nick, with me to tour the new downtown attraction was a must. I thought I might half-see the Hall of Fame through his eyes, but as we arrived in the grand atrium-style entryway known as the Quad, we uttered a synchronized “Wow.”

To the left, a floor-to-ceiling mural by Steve Penley depicts a kaleidoscope of national football spirit. Straight ahead, 768 helmets create a wall of shining headwear. Every college football team in the nation is represented, with blank spots for future additions. Some helmets are lit up, letting you know that an Auburn or Notre Dame fan has visited today. We can easily see that a Georgia Dawg is pawing through the exhibits.

FROM THE START, the 94,000-square-foot Hall has an interesting something-for-everyone appeal, activated the moment you touch your RFID badge credential to a screen, sign in and select your favorite team.

“Traditional halls of fame just had statues and plaques,” says spokesman Marcus Margerum. “This is a very interactive exhibit. It’s not just about Hall of Famers. On the second floor we have exhibits dedicated to cheerleaders, bands, mascots. It’s about the whole sport of college football.”

Once your credential is activated, your visit to any or all of the Hall’s three stories will be personalize for your favorite team, creating an undulating stimulus-response experience that blows away all notions of a normal museum.

Downstairs, the 45-yard, real-turf Playing Field features the Chick-fil-A Peach Bowl Skill Zone, where you (or your thrilled brother) can kick a field goal, leap into the air to catch a football knowing there’s the safety of a cushion beneath you, or see yourself dancing on the Jumbotron. 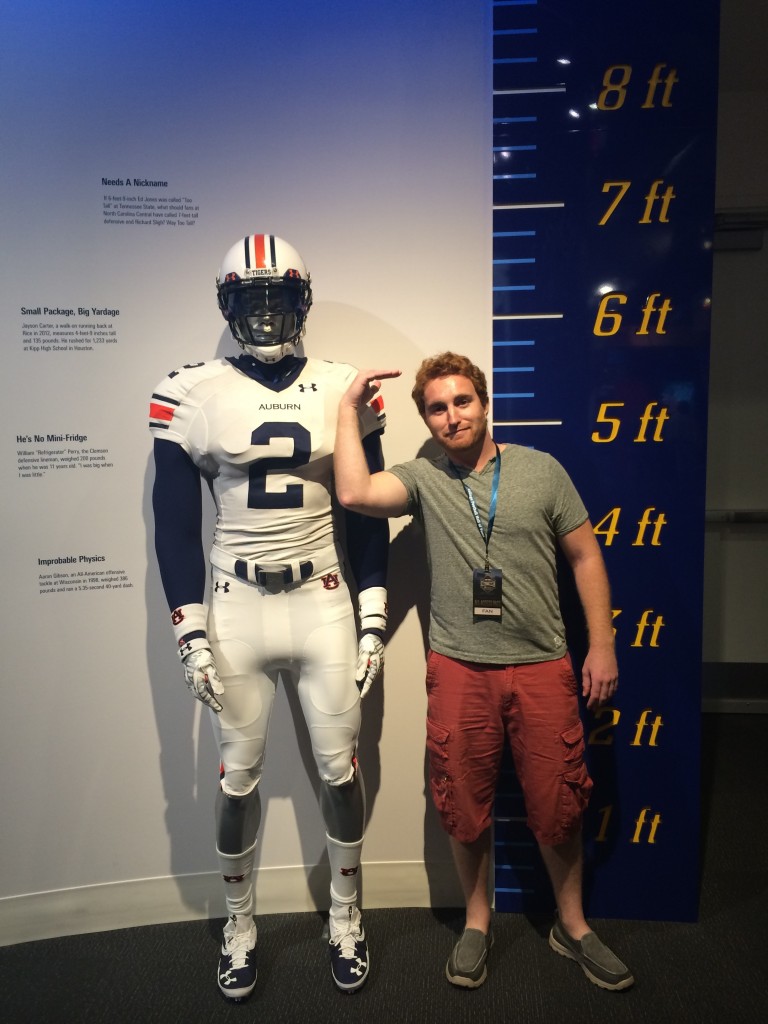 ON THE SECOND FLOOR, museum meets modernity as flashing screens combine with traditional displays that cover everything from tailgating to the evolution of equipment, from storied rivalries to beloved coaches.

Here, high-tech experiences await: Sit at a desk in front of a green screen and try your hand as a host of the ESPN College GameDay, discussing the contest with ESPN’s Chris Fowler and Desmond Howard. Karaoke your team’s fight song. Take a photograph and digitally face-paint your game-day colors. Call a historic play and hear your voice as the narration.

This is where the Hall of Fame really strikes a contemporary chord: digital share-ability. You’ll be connected to all of these interactive experiences when you leave, so you can share them on social media and with friends and family. They are digital souvenirs to you, and savvy marketing for the Hall.

The top floor features the Hall of Fame itself, still high-tech but more classic in construction, representing more than 900 players and 200 coaches. 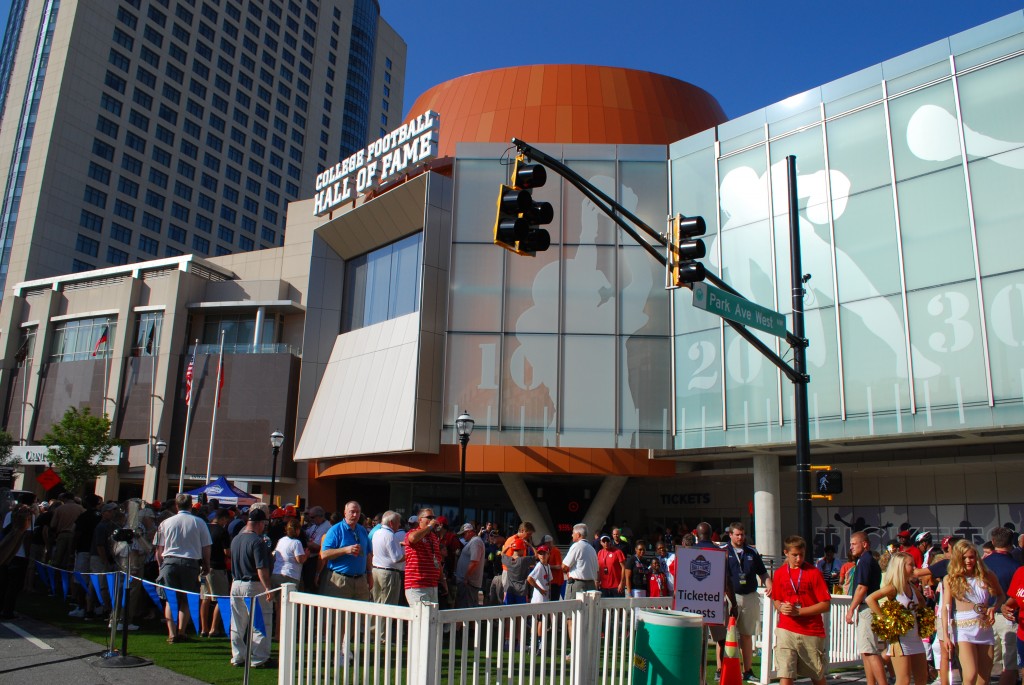 AN INCREDIBLE VIEW of downtown reminds you that you’re in the center of Atlanta’s cultural playground.

“Sure, the big attractions here are for tourists, but they’re for us, too,” says John W. Stephenson Jr., president and CEO. “We residents seem to hesitate to waste a Saturday downtown. We hesitate to recognize how good we really have it compared to other cities, all these world-class attractions gathered in one place.”

Whether you’re there for the love of the game or are simply fascinated by the smart uses of technology, the College Football Hall of Fame makes for a fun family visit, date night or company outing. Even someone as football inept as I am will be amazed by the touch screens, the fur-coated tailgaters of yore and the play-like feel of Atlanta’s latest attraction.

My brother? He shouts so loud during his play-by-play that he momentarily loses his voice. “Play it again!” my family requests later that night, laughing as he clicks replay on the All-Access Pass on his phone. His Facebook profile picture is changed within an hour. The shot? Him kicking a field goal.

Hally Joseph has an M.F.A. in writing from SCAD and has been published in Encore Atlanta and BurnAway Magazine. Her essay “An Open Letter to the Man Who Stole My Father’s Hash Brown in a McDonald’s in Panama” was published in Atticus Review. She talks writing and reading on Twitter as @hally_joseph.

View all posts by Hally Joseph →