ATLANTANS HAVE SEEN multiple Cirque du Soleil productions over the years, and they each seem to possess similar ingredients. Music you want to download. Performers that contort their bodies in amazingly impossible ways. Uniquely funny European humor. Random (or not) audience members chosen to participate.

But even if you’ve seen every Cirque, each has its own feel and seems fresh, with a distinct hybrid mix of rock concert, laser light show, circus and comedy show.

Amaluna, the newest Cirque production to hit town, plays under the yellow-and-blue Big Top at Atlantic Station through Nov. 30. The hip scene includes people of all ages taking selfies in front of 10-foot-tall photos of performers tacked onto the side of an on-site tractor-trailer. Walking into the tent, you’ll hear birds chirping and bugs buzzing as an island setting appears before you. Performers dressed as half-human, half-animal characters with sheer butterfly wings and horse tails glide down the aisles.

Amaluna, a tribute to the work and voice of women, is the first-ever Cirque show with a cast that’s 70 percent female. Amaluna is a fusion of the words ama, which refers to “mother” in many languages, and luna, which means “moon,” in Spanish and Italian. Its story follows the plot of Shakespeare’s The Tempest. Prospera, the queen, rules an island inhabited by goddesses. Her daughter Miranda falls in love with a young man who lands there after a shipwreck.

The Amaluna band consists entirely of women, another Cirque first. With their avant-garde costumes, punk makeup and manhandling of guitars, these are some tough rocker chicks, yet their beautiful voices can soar like angels during slower, softer songs.

Among the more memorable acts:

* Miranda balancing on one hand on a tiny pole, contorting her body forward, sideways and backward (prompting thoughts of “How can anyone do that?!” and “Why am I not in the gym right now?”). 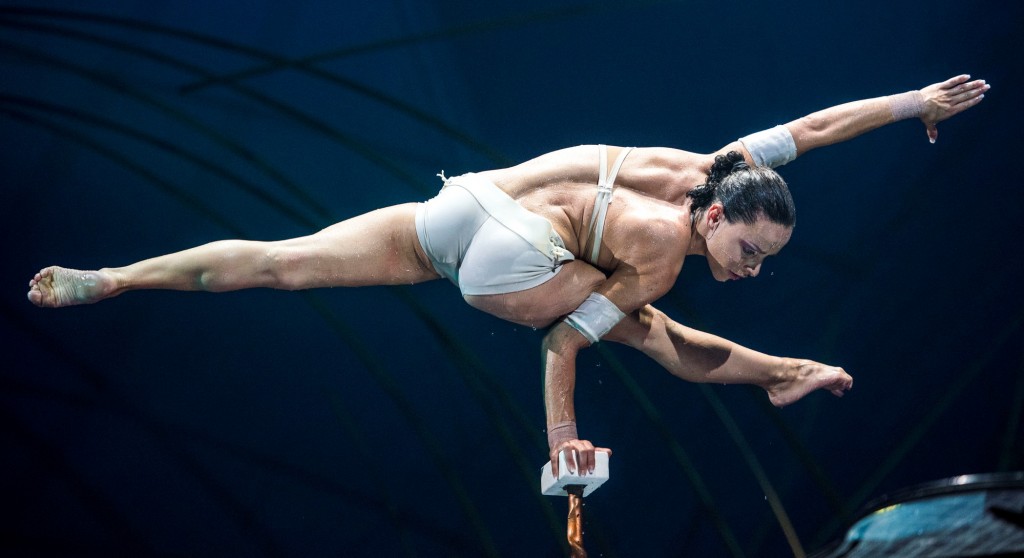 * Prospera oh-so-carefully picking up 13 long sticks, one at a time, with her toes — all while balancing her body weight on one leg.

* A juggler catching too-many-balls-to-count dropping from the sky, occasionally pausing to balance one on his forehead or back.

Amaluna has a Vegas feel to it, with shades of red, strobes of light and elements of sensuality. And it does have men, as evidenced by the catcalls greeting the character of Romeo, who had the good sense to shuck his shirt. As you might guess, the show is not for young children.

Whether you’re a Cirque newbie or have seen them all, Amaluna is a singular experience.