The next 'Parks and Recreation'? — Encore Atlanta
Skip to content
ShareTweetShare

CARA IS TIRED AND DISILLUSIONED. She hasn’t made more than $20,000 a year since graduating from college. Suehyla, her co-worker, has had to miss every holiday, wedding, funeral, bar mitzvah and Super Bowl for the past 10 years.

But those are the breaks. At least Cara Mantella and Suehyla El-Attar can legitimately call themselves professional actors. They’re also two of the six performers in MEATY — Metropolitan Educational Atlanta Theatre for Youth. The group rehearses in Atlanta and travels nationwide by minivan, with 267 bookings a year and seven “message” shows about such topics as nutrition, bullying and the dangers of the wicked weed.

But not really. MEATY was invented by Eric Mendenhall and Matt Myers, creators of “That’s Educational,” a mockumentary Web series. Like Cara and Suehyla, they’re real-life Atlanta actor 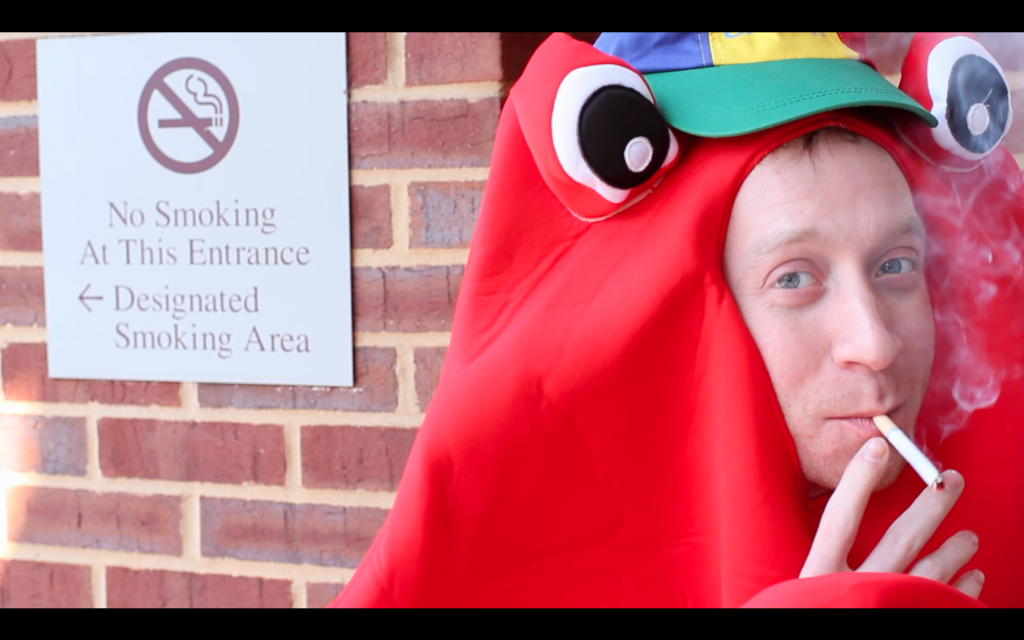 s who play skewed versions of themselves in the show. The debut season — eight episodes of five to seven minutes each — is now AVAILABLE ONLINE.

MUCH LIKE THE WORK of filmmaker Christopher Guest, known for the full-length mockumentaries Waiting for Guffman and Best in Show, the plots and characters in “That’s Educational” are comically painful. Because they seem just real enough.

In a frog costume, a delightfully dense Jenny Holden bangs on the window of a car as it pulls away, desperately asking the unseen child inside: “Did you like the show?!”

In the season finale, most of the gang stands outside the van, bickering about how to fix a flat tire. MEATY member Jimi Kocina simply resigns himself to his fate, which means staying inside the van and lighting a joint. The rest of the MEATY family includes Bryan Brendle (“narcissistic leading man”) and Nick Arapoglou (“overly eager new guy”). Justin Anderson directs, and Chris Bartelski is director of photography.

Mendenhall and Myers are on the edge of their seats these days, waiting for word of mouth to build until enough fans (hopefully some with financial support), demand more episodes.

COLLECTIVELY THE MEATY PLAYERS have performed at every theater in town and have a substantial number of film and commercial credits. Many have done educational theater, “which is just so ripe with eccentric characters and crazy situations,” says Mendenhall. “These people spend a lot of time together, and conflicts arise. The show is mostly about the bizarre way they work through these conflicts.”

In one early scene, for example, the MEATY mates are in costume — big, bright-red, crab-character getups. They’ve been called to an emergency meeting in what looks like a supply closet. Why the meeting? To learn the fate of a cast member who got a little too crabby and hurled his crab self off a school stage, attacking an audience member whose cellphone went off.

Myers plays an administrator, an affable nincompoop prone to making grandiose yet lame statements. (“I’m high on the possibility of a better tomorrow.” Or “Defeat is temporary. Giving up is permanent.”)

EARLY FANS of “That’s Educational” have said that in addition to the Guest films, the series reminds them of the twisted humor on such TV shows as “Arrested Development,” “The Office” and “Parks and Recreation.”

“There’s not one single thing they’re comparing it to,” Mendenhall says of the feedback he’s received. “I think that gives credence to the fact that we have found our own voice.”

Feedback has been “incredible” so far, he says. One recent highlight: He was getting coffee in Midtown and a guy approached him to say “I love That’s Educational! It’s the most honest show I’ve seen!”

Myers has sketched out episodes for a second season, conditional on financing and aligning schedules. About $1,250 is needed to produce each episode and pay the actors “a little something.”

Mendenhall and Myers have big dreams. They hope they’ll create much more together, including feature-length films. But for now, they hope this first season of  “That’s Educational,” sort of like The Little Engine That Could, will mark the beginning of their chug-toward-success story.