Perched on the Perimeter just north of Buckhead — and stretched along the spine of Roswell Road — is the independent enclave of Sandy Springs. There’s no downtown to speak of, but Sandy Springs doesn’t need one. It knows who it is — the first municipality to break from Fulton County. Beginning in the 1950s, residents fought the state to incorporate as a city. They succeeded in 2005, and since then, have been vigorously doing their own thing. A bonus: 20 miles of Chattahoochee River shoreline, which runs through the city.

Perched on the Perimeter just north of Buckhead — and stretched along the spine of Roswell Road — is the independent enclave of Sandy Springs. There’s no downtown to speak of, but Sandy Springs doesn’t need one. It knows who it is — the first municipality to break from Fulton County. Beginning in the 1950s, residents fought the state to incorporate as a city. They succeeded in 2005, and since then, have been vigorously doing their own thing. A bonus: 20 miles of Chattahoochee River shoreline, which runs through the city.

HISTORICAL NUGGETS: In its early days, Sandy Springs was at the edge of the Georgia frontier. The Chattahoochee was the dividing line between the United States and the Cherokee Nation. The Cherokees were driven out and the area was settled through a land lottery in the 1820s. It was variously called Oak Grove, Hammond and Burdal. A popular camp meeting was held on the sandy banks of a natural spring. When a post office was built there in the early 1900s, the name Sandy Springs became a natural choice.

In the 1920s, Sandy Springs became a popular getaway for wealthy Atlantans, including Coca-Cola’s Asa Candler, who built summer homes there. During the Great Depression, many struggling farmers in Sandy Springs became moonshiners or guards at a convict camp near what is now Roswell Road and Hammond Drive.

WHO LIVES HERE: You’ll find neighborhoods with older residents and young families. Apartment complexes house singles and families of all income ranges. As a whole, however, Sandy Springs is affluent. The average household income in the 2010 census was $114,540. One-third of the population is African-American and Hispanic. The population doubles during the day as people come to work.

WHAT TO SEE: Sandy Springs’ namesake underground spring is at Heritage Green, a park in the center of the city. The park hosts a farmers market every Saturday morning from mid-April through November with some 50 vendors offering local produce, pasture-raised meat, fresh eggs, dairy products and crafts. A free summer concert series is held here as is the Sandy Springs Festival (Sept. 20-21), an annual event since 1984. Metro Atlanta’s longest-running comedy club, the Punchline, has hosted comedy legends from Eddie Murphy to Jerry Seinfeld and Dave Chappelle.

Anne Frank in the World, a museum devoted to the young Jewish girl killed by Nazis during World War II, tops the Sandy Springs Welcome Center. It features 600 photographs and a video that contains the only known footage of Anne. It also includes a video interview with John Galambos, a Holocaust survivor and husband of former Sandy Springs mayor, Eva Galambos.

WHERE TO SHOP: You’ll find plenty of chain stores among the office towers and strip malls but also unique offerings. Veronica’s Attic is a locally owned boutique with women’s clothes, accessories, jewelry and beauty products. Consignment shops like Jody’s 5th Avenue attract out-of-towners. In fact, a group of women from Alabama recently rented a tour bus and traveled to here for boutique items at resale prices. Specialty stores include Penzeys Spices, which carries more than 250 herbs and seasonings. Antiquers can scour stores like Kudzu & Co. or bid at Gallery 63, where the reality TV series “Auction Kings” is filmed.

WHERE TO EAT: Artisan cheeses are made on-site at CalyRoad Creamery. Visitors can watch the cheese-making through a big glass window, sign up for classes or schedule private wine-and cheese-tastings for groups. Breadwinner Café & Bakery has sandwiches, salads and soups; its homemade bread has been featured on “The Today Show” and the Food Network.

That Pie Place bakes 20 kinds of pies and let’s you build your own. The lineup ranges from Salmon Teriyaki to Philly Cheesesteak and Chipotle Black Bean Burger. Dessert pies include the more traditional fruits plus a S’mores pie and something called Elvis (bananas, vanilla custard, crushed vanilla wafers, peanut butter and chocolate).

WHAT YOU MIGHT NOT KNOW: If your life lacks ritual or just feels off, attend the Tuning In ceremonies at Muse for Life Community Inspiration Center. It offers new moon and full moon movement and music ceremonies, plus tea ceremonies in its Tea House. Music therapy and classes in music, dance, meditation and yoga are available.

HIDDEN GEM: Playable Art Park, a nontraditional playground with a giant metal spider, opens this summer at Abernathy Greenway Linear Park on Abernathy Road N.W. Kids can play while adults check out the art. When finished, the park will have six large pieces of climbable art. Kids will be able to clamber over the big yellow arachnid, swing on a giant red swing, walk through a granite boulder and slide down a dragonfly.

Stell Simonton is an Atlanta freelance writer whose work is found in the Christian Science Monitor, The Atlanta Journal-Constitution and Youth Today. Anna Simonton is an independent journalist and filmmaker whose articles have appeared in AlterNet, the Nation and Salon. 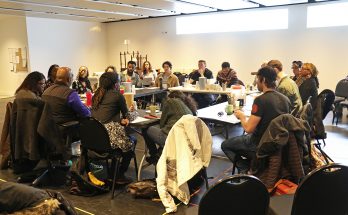