Broadway and TV performer Megan Hilty hits Atlanta this weekend to headline the Alliance Theatre’s sixth annual “A Tony Evening” in Midtown, a posh affair that supports the theater’s youth and family programs, and to sing in concert at the Cobb Energy Performing Arts Centre. 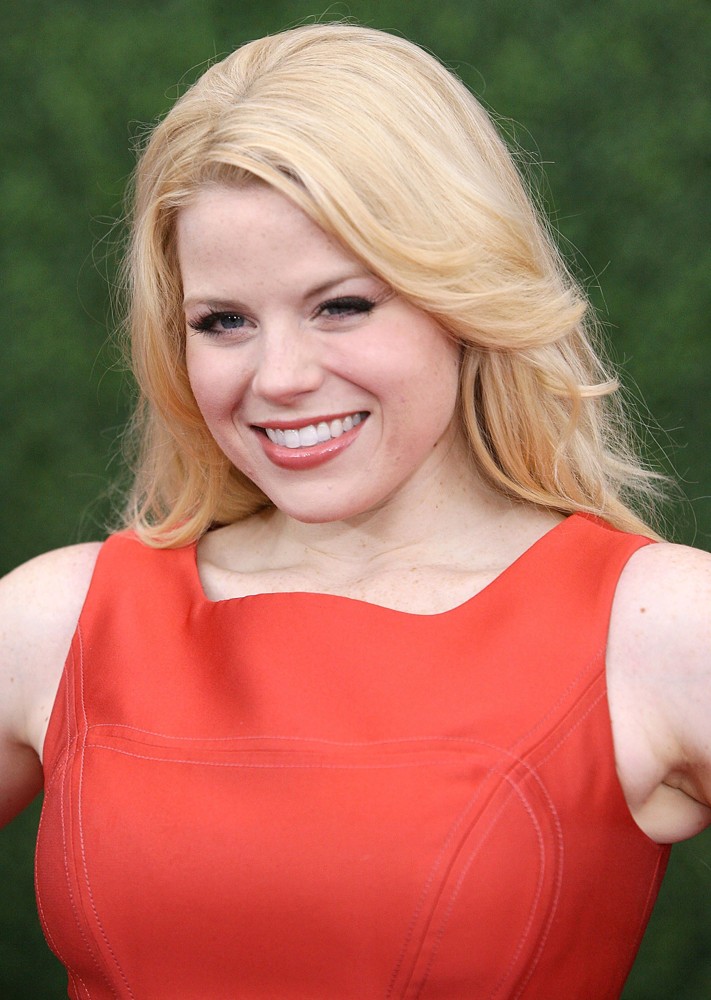 Hilty first caused a stir in New York theater when she understudied the role of Glinda in Broadway’s Wicked, eventually taking over the part originated by Kristin Chenoweth. She waved Glinda’s wand for more than four years, on both coasts and the national tour. She also played the Dolly Parton role in Broadway’s 9 to 5: The Musical.

Then she scored much broader name recognition as Ivy Lynn on the NBC musical drama “Smash.” The let’s-put-on-a-Broadway-musical show lasted two seasons. More recently, Hilty played Sean Hayes’ pal Liz on NBC’s “Sean Saves the World,” which was quickly canceled. And she’s the voice of China Princess in the animated film Legends of Oz: Dorothy’s Return (in movie theaters this weekend).

Hilty’s debut solo album, It Happens All the Time, came out a year ago. It wasn’t the compilation of show tunes she first envisioned, evolving instead into a mix of contemporary breakup songs, “but not those ‘I’m-crying-with-a-bucket-of-ice-cream’ type songs,” she says.

Hilty married guitarist-singer Brian Gallagher a year ago and recently announced she’s pregnant. Still, she took some time from an overflowing schedule to answer a few questions by email.

Question: Your CD, It Happens All The Time, was a change of pace from Broadway material. Given that you studied operatic voice, were you surprised that you did so well with indie pop-type songs?

Answer: Thank you! It wasn’t that easy though, which is why I wanted to do this album in the first place. The challenge of trying something so new and out of my comfort zone was the main appeal. When I started recording songs like this for “Smash,” it was quite an adjustment. The producers just kept saying: “Can you take the Broadway out of your voice?” or “You sound like a Disney princess.” Which just meant I needed to adjust my sound to make it more intimate and less like I was singing for thousands of people.

Q: Before you became Glinda on Broadway, you were the understudy. What was it like the very first time you were called on to perform the role?

A: It was terrifying and literally a dream come true at the same time. It was my Broadway debut, and I was playing opposite Idina Menzel — who had just won her Tony [for playing Elphaba]. I had never done the show with other people before! I had only rehearsed with one other person, so it was a bit overwhelming. Idina was amazing, though. She came into my dressing room before the show and said, “Let’s go out there and make the show our own.”

Q: Even non-theatergoers seem to have a passion for Wicked. What ignites such passion and excitement?

A: It’s the ultimate underdog story. Unfortunately, we all at some point understand what it means to be that person. It doesn’t hurt that it taps into The Wizard of Oz, easily one of the most cherished and recognized stories of all time.

Q: Speaking of Oz, Dorothy’s Return is about to hit movie theaters. What was that like?

A: The great thing about animation is there are no limits. You can try anything and when something doesn’t work, they don’t use it.  It’s not like you’re failing in front of thousands of people. There’s an artistic freedom that comes with these jobs that you can’t get onstage or in front of a camera.

Q: Not counting the folks who’re tuned in to Broadway names, many people didn’t know your name before “Smash.” How have you handled sudden celebrity?

A: The only thing that’s really changed is that more people want to talk to me when I’m out in public. It’s funny how candid people are with their feelings about the show and about my character. The hardest thing to hear is “Wow, the camera really does add a ton of weight! You’re tiny!” I get backhanded compliments like that all the time.

Q: When asked to give advice to anyone aspiring to a musical theater career, you stress one thing —  “Ask yourself why” — and you repeat that three times. Why?

A: A lot of people think this industry is more glamorous than it really is. I can’t stress enough how much hard work and thick skin are required to be in this business.  So if you’re in it for the wrong reasons, you’re going to have a really hard road ahead of you. I ask the question because I don’t think people really think about their motives.

Q: Your other advice includes “Be nice to everyone because you never know.”

A: You can even cut out the “you never know” part. There is just no reason not to be nice to everyone. It’s why I tell young people who want to be actors that they should try everything in the theater, onstage and off. It’s so important to know that as an actor you are a very small piece in a very large puzzle. Just because you get more attention than the people around you doesn’t make you better than them. That awareness makes you much more appreciative of the hard work that everyone is doing to make the show go on — not to mention it just makes you a better team player.

Q: With all of its elaborate musical numbers, “Smash” must have taken an immense amount of extra work. Was it as exhausting as it seemed?

A: I don’t think many other things could compare to the “Smash” schedule. When we weren’t filming, we were in the recording studio or a dance rehearsal or a costume fitting, so we were kept very busy. But I love that! It was the perfect job for me because it was the best combination of all the things I love doing, so even on the longest day I was beyond thrilled to be there.

Q: What was it like to have your musical theater idol Bernadette Peters play your mom in “Smash”?

A: Overwhelming! I still act like an idiot around her.  And she couldn’t be nicer, which made it worse! I was very lucky to get to have such intimate scenes — and even a song — with her. She is extremely supportive of everyone she’s working with. She’s not like a lot of other stars who head back to their dressing rooms when they’re not working. She was always on set watching and complimenting everyone. That’s old-school theater etiquette that you rarely see anymore.  If I’ve picked up anything, hopefully it’s that.

Q: You seem to be in high demand, plus you got married last year and now you’re expecting a baby. How do you cope, find balance and also time for yourself?

A: Brian and I decided that it’s unacceptable to spend too much time away and, luckily for me, he’s an incredible guitar player and singer, so he travels with me to all of these concerts. We actually have a lot of time together. Also, while I know they are not people, we have two dogs that are the closest things to children I’ve ever known, and I believe that responsibility forces you to get your priorities in order.

A: I know it sounds cheesy but they’re all my favorite. I’ve learned something new and unique from every role I’ve played. I can’t wait to play Mrs. Lovett in Sweeney Todd. I know I have a couple of years ahead of me before I can do it, but I’m gonna make it happen!

Q: If and when you do have a day off, what’s your favorite way to spend it?

A: With our dogs, or catching up on the TV we’ve missed, walking in Central Park and going to the movies!

A: Both for different reasons. California for the sunshine and the space and NYC because it feels like home.

Q: Which songs can audiences at your shows usually expect to hear?

A: Songs from “Smash.” That’s what people are coming to hear, and I love singing them, so let’s make sure we’re all happy!