As spring sneaks into the city, plants are popping up at the Atlanta Botanical Garden, growing, woven into sculptures of every size and en masse in blankets of flowers. 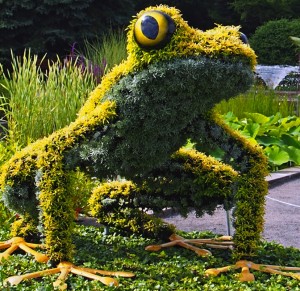 The show of color starts this month during Atlanta Blooms! as nearly 300,000 tulip bulbs pop out over a period of weeks. More than 61,000 new bulbs were planted last fall, in shades ranging from shining yellow to sherbet orange to bright pink, and sporting names like Tequila Sunrise, Banja Luka and Maureen.

Four Seasons, which goes on display the first week of May and continues through October, will features huge busts — more than 15 feet high — of faces representing each of the seasons. The towering sculptures, built by artist, screenwriter and filmmaker Philip Haas (nominated for a 1995 Academy Award for Angels and Insects), were featured last summer at New York’s Botanical Garden. Haas’ intricate artwork contains man-made and natural elements (fiberglass, paint, twigs, fruits, vegetables and leaves).

If you build it, they will come. And if you rebuild it, they will probably come again. Last year when the garden unveiled Imaginary Worlds, the giant topiary-like creatures drew visitors by the thousands from all over the region.

Imaginary Worlds: A New Kingdom of Plant Giants opens in early May and also runs through October. Nine new characters will join the menageries, all created through mosaiculture, a centuries-old horticultural art. Giant frogs, gorillas and orangutans will join the Shaggy Dog, Unicorn and Earth Goddess on the garden’s grounds.