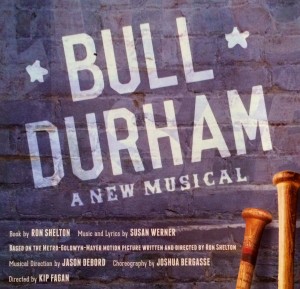 The world premieres include The C.A. Lyon’s Project, the 2015 winner of the Allliance/Kendeda National Graduate Playwriting Competition.

It’s an ambitious season, one worthy of a Tony Award-winning regional company, and one that should make theatergoers nationwide sit up and take notice. And although the Alliance will never comment on the future of any show, it’s clear that its two world premiere musicals — Bull Durham and Tuck Everlasting — which have been workshopped in New York and have some heady names attached (Casey Nicholaw, Claudia Shear), could be Broadway bound.

“The season is full of people, stories and human moments that are simply larger than life,” artistic director Susan V. Booth said in a statement. “Because life lived large takes you all over the emotional map, we’ve got a season that does the same, spanning passion, epiphany, history, humor and mortality.”

The company also continues its groundbreaking Theatre for the Very Young, created with ages 18 months to 5 years in mind. Details HERE.

The lineup looks like this, divided by Alliance Stage (mainstage), Hertz Stage and family series productions. (For more, see this ENCORE CONVERSATION with the Alliance’s Celise Kalke.)

Steel Magnolias. Oct. 22-Nov. 9. This dramatic comedy, written by Robert Harling, explores the bonds among a group of women in northwest Louisiana. The title suggests the “female characters are as delicate as magnolias but as tough as steel.” The 2005 Broadway staging featured Delta Burke as Truvy, Christine Ebersole as M’Lynn and Marsha Mason as Ouiser. The 1989 film featured Dolly Parton as Truvy,  Sally Field as M’Lynn and Shirley MacLaine as Ouiser, with Daryl Hannah, Olympia Dukakis and Julia Roberts. A 2012 remake by Kenny Leon for Lifetime television featured Jill Scott as Truvy, Queen Latifah as M’Lynn and Alfre Woodard as Ouiser, with Condola Rashad in the Julia Roberts role. Tony Award-winning actor Judith Ivey (Hurlyburly) directs. Details HERE.

Tuck Everlasting. Jan. 21-Feb. 22. World premiere musical based on the Natalie Babbit novel. The story: A young girl dreaming of adventure meets a family with a fabulous secret. This chance encounter will change them all forever. Directed and choreographed by Tony Award winner Casey Nicholaw, whose Broadway credits include Elf, The Book of Mormon, Spamalot and The Drowsy Chaperone. The script is from Claudia Shear (Dirty Blonde). New York workshops, which have been held the past several years, featured Tony Award nominee Carolee Carmello (Parade, Scandalous). No details yet on Atlanta casting. Other details HERE.

Tell Me My Dream. April 15-May 10. World premiere. The latest from Atlanta-based playwright Pearl Cleage (The Nacirema Society Requests, What I Learned in Paris and many others. Dream introduces a family for whom music is as necessary as freedom and a city that’s just beginning to hear their song. It allows characters in 1910 and the present to learn from each other, with modern-day adolescents being drawn into a time before technology. Booth directs. Details HERE.

Native Guard. Sept. 26-Oct. 19. World premiere. Adapted by U.S. Poet Laureate Natasha Trethewey from her 2007 Pulitzer Prize-winning collection of the same name. Native Guard juxtaposes Trethewey’s experiences as a child of a then-illegal marriage between her black mother and white father in 1960s Mississippi with the experience of an African-American Union soldier charged with guarding white Confederate captives during the Civil War. It’s part of the National Civil War Project, a national partnership between major theaters and universities to create original theatrical productions and innovative academic programming around the 150th anniversary of the Civil War. Details HERE.

The C.A. Lyon’s Project. Feb. 13-March 8, 2015. World premiere. Playwright Tsehaye Geralyn Hébert is the winner of the 2015 Kendeda playwriting prize, comes from the School of the Arts Institute of Chicago. Dance and theater mingle in this 1980s-set piece about the founder of a prestigious African-American dance company who is dying of AIDS. The three lead dancers — a tattooed hip-hop phenom named Chaos Unit; a ballerina named Bethlehem Dunning, who was raised by a deaf mother; and the rebellious Amandla Sister Afrika — must figure out how to push on.

“The C.A. Lyons Project is the most multidisciplinary show to come through the competition and is so ambitious in its scope,” said Celise Kalke, the Alliance’s director of new projects. “It’s a great piece to kick off the Alliance/Kendeda National Graduate Playwriting Competition’s next decade.” Details HERE.

Edward Foote. March 27-April 19, 2015. World premiere. Atlanta playwright Phillip DePoy delves into “Appalachian noir” to tell the story of a stranger in a small, rugged 1930s community. Could it be Edward Foote, a drunken good-for-nothing? The tale is told against a backdrop of folk songs and shape-note singing. Atlanta-bred, Oregon-based Chris Coleman directs. Details HERE.

Courage. Nov. 3. World premiere. The Alliance takes a different look at the Civil War with this piece for middle-schoolers written by Atlanta actor and playwright Scott Warren. It’s a collision, as the Alliance likes to say, between a classic text and modern-day life. It draws on Stephen Crane’s The Red Badge of Courage, about a young Civil War soldier fighting fear, with tales of challenges faced by contemporary tweens. Rosemary Newcott directs. Details HERE.

James and the Giant Peach. March 14-29, 2015. The fabulous Newcott directs this musical based on the children’s novel by Roald Dahl, about a young boy’s wild, surreal world of magic and adventure. Details HERE.