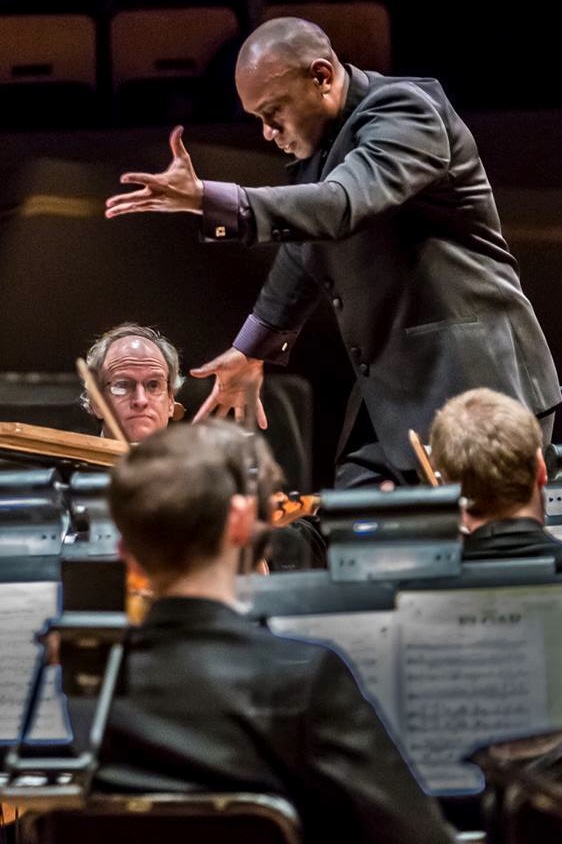 When Joseph Young was in fourth grade, his family settled in Goose Creek, S.C.,  a city of about 36,000 less than 30 minutes north of Charleston, where he was born.

In sixth grade he began playing the trumpet. His dad, a Navy man, thought it would keep him out of trouble. The trumpet was also the only instrument he could get to make a sound.

Then at age 16, Young attended a summer program at the Governor’s School for the Arts, where he took lessons, studied music theory and conducted for the first time. Goodbye, trumpet. Hello, baton.

“From then on, I was hooked,” he has said. “I wanted to become a conductor.”

Young was one of eight candidates invited to audition by conducting the ASO. Over two days, he led the musicians in the first movement of Beethoven’s Fifth Symphony, Bartok’s Concerto for Orchestra and Debussy’s Prelude to the Afternoon of a Faun. He also conducted the ASYO and spoke to the staff. His appointment was announced Feb. 5. He becomes the ASO’s first African-American assistant conductor.

It all goes back to those high school days in band and orchestra. Young went on to study at tiny Newberry College near Columbia and then the University of South Carolina. His first job was teaching band at D.W. Daniel High School in the town of Central (population: 5,154).

Until last year, Joey — as some friends call him — was a resident conductor with the Phoenix Symphony. This season, he’s been a Charleston-based freelancer, conducting in Europe and the United States. He’ll assistant conduct Spoleto Festival USA’s production of Leos Janacek’s opera Kat’a Kabanova in late May, helping prepare the musicians and working with conductor Anne Manson. Tony Award-winning director Garry Hynes (The Beauty Queen of Leenane) makes her opera debut with the piece.

“I am so excited and honored to be joining the Atlanta Symphony Orchestra’s artistic team alongside Robert Spano and Donald Runnicles,” Young says of the orchestra that has increasingly become known for its innovation and world-class musicians. His ASO contract is for one year, with the possibility of an extension.