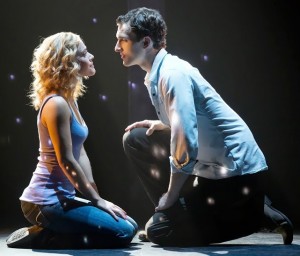 You can see a show — and benefit breast cancer awareness at the same time. Broadway Across Atlanta is giving you eight chances to do so with Ghost the Musical, coming to the Fox Theatre in early November.

For every ticket sold through Nov. 4, Broadway Across Atlanta will donate $10 to the Georgia Breast Cancer Coalition Foundation.

Ghost the Musical is based on the popular movie with Patrick Swayze, Demi Moore and Whoopi Goldberg, in which a murdered man uses a medium to try to communicate with his girlfriend. The stage version includes the signature song “Unchained Melody,” along with an original score by Dave Stewart and Glen Ballard. Steven Grant Douglas and Katie Postotnik (pictured) play separated sweethearts Sam and Molly.

The musical ran for four months on Broadway in 2012. It was nominated for three Tony awards and won a Drama Desk Award for  outstanding set design.

For more on the tour that will play the Fox, go HERE.