In 2007, The Dramatist magazine named playwright Kenneth Lin one of “50 to Watch.” So far, he hasn’t disappointed. 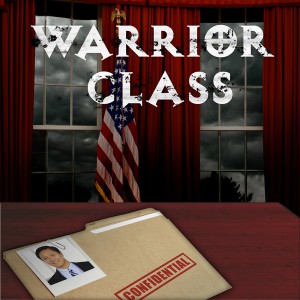 The New York-based Lin, now in his mid 30s, married and the father of a toddler son, is one of the most widely produced Asian-American playwrights in the country. At the moment, he has four plays in some stage of development, is creating the new limited series “American Way” for USA Networks and is a staff writer on Netflix’s “House of Cards,” starring Kevin Spacey.

His …” said Said, you might recall, received its world premiere at the Alliance Theatre in 2006, as winner of the Alliance/Kendeda National Graduate Playwriting Competition. With Warrior Class, he returns to celebrate the 10th anniversary of that groundbreaking program, which helps graduate school playwrights move from academia into the real world.

“Ken is not only a great storyteller,” says Mark Bly, Lin’s mentor and one-time instructor at the Yale School of Drama. “He tackles subjects that challenge us as artists and audience members. He creates rigorous stories for the stage that raise questions about our responsibilities as human beings to our fellow human beings.”

Warrior Class, which follows the surging political career of a young Chinese-American lawmaker with Obama-like magnetism, debuted in July 2012 at off-Broadway’s Second State Theatre. Critics called it “taut” and “provocative” as well as “smart, tight and topical.” Even The New York Times liked it. A lot.

Lin himself says, “I’m interested in politics in terms of how an ethical society is engineered.” By email, he shared a few other insights:

Question: Where did the idea for this play come from?

Answer: I began writing Warrior Class when I noticed an interesting phenomenon within myself. Whenever I heard a news report about a gunman that went on a mass rampage, a little part of myself worried that the shooter would be a young man of Asian descent. This scared the hell out of me, and I promised myself to always tell stories about what terrifies me to the core.

Q: Why this story? Why now?

A: America is changing, demographically, at a lightning pace. There are more languages spoken here than have ever been spoken before. Crowds looks different. Media looks different. We are stretching and growing as a nation. Length comes with pain. Let’s talk about it.

Q: How did your interest in politics start?

Q: How closely do you follow politics now and through what channels?

A: It goes in waves. Sometimes I’m up to my neck in it. Sometimes I need a break. I try to surround myself with a lot of opinionated people.

Q: How much and what kinds of research went into Warrior Class?

A: I spent a lot of time with political fixers/insiders. They’re actually quite a chatty bunch. Incidentally, they say that things usually get much dirtier than they get in the play.

Q: What is your earliest memory of the theater?

A: In singing a lullaby to my son, I suddenly came to the realization that my grandmother sang it to me, and it isn’t a proper lullaby. It’s a trope from the traveling minstrel shows that she skipped school to attend.

Q: When did you realize you could, and would, be a playwright?

A: I find that I’m not very good at visualizing destinations. In life, I think I have a tendency to set a destination, and then plug doggedly forward, head down, until I’m often well past the endpoint. I will say, though, that before embarking on this journey, I thought about all the people I know who, in debate with themselves, compromised on the perceived limits of their horizons. Very early on, I knew that for me, those kinds of compromises would not lead to a good place.

Q: What is the common thread, or idea, that runs through your plays?

A: In looking at my body of work, I find myself talking a lot about confinement or ensnarement. …” said Said is partially set in a prison; Po Boy Tango is about a man who can only bear to see his mother through a television screen; Intelligence-Slave is set in a prison; Fallow traces a journey on the way to see someone in a prison; Warrior Class is about the complicated philosophical, intellectual and personal ensnarements that are involved in a political career.

Q: What does Ken Lin bring to a play that another playwright might not?

A: I am a child of immigrants who have ferociously trekked throughout the world, surviving political strife to come to America. I like a good fight, and I especially like them when there are serious stakes involved. I’m from a restaurant family, so I have a pathological need to feed you. Hopefully, it doesn’t taste like anything you’re accustomed to being served.