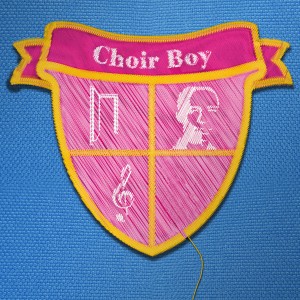 Tarell Alvin McCraney has been writing plays since he was a 13-year-old trying to make his way in inner-city Miami. He chose theatre as way to support and express himself, he’s said.

He’s been doing a whole lot of expressing himself since Atlanta audiences discovered him in 2008, with In the Red and Brown Water, his winning Alliance/Kendeda National Graduate Playwriting Competition drama about one young woman’s ascent into adulthood.

Now 32 and one of the more celebrated young playwrights in America and London, McCraney returns with Choir Boy, an Alliance co-production with Manhattan Theatre Club, a world premiere that, before now, has only been seen in London and New York.

It’s part of a marathon sprint he hopes to complete (and survive) by April 2014. He spent the summer in Chicago, teaching at Steppenwolf Theatre Company, where he’s an ensemble member alongside the likes of Tracy Letts, Martha Plimpton and Joan Allen. And he’s hopping between New York, Haiti, the Dominican Republic and London for research and rewrites on his adaptation of Antony and Cleopatra, a co-production with New York’s Public Theater, London’s Royal Shakespeare Company and GableStage in Miami. In between, he’ll be at Yale with co-winners Stephen Adly Guirgis and Naomi Wallace, accepting the inaugural Windham-Campbell Literature Prize (and $150,000) and happily collecting the first installment of a five-year, $635,000 MacArthur “genius” grant.

He was also hoping to squeeze in a quick stop to Atlanta to catch Choir Boy, his coming-of-age piece about the push-and-pull of tradition and self-expression in young black men. In it, he takes on themes of race, sexuality, faith, bullying, difficult family relationships and music.

McCraney grew up hard in a Miami, moving among relatives. Sometimes he’d live with his dad and grandparents, dining on PB&J sandwiches and going to church, where he sang in the choir. Other time he’d be with his mom, a crack addict with an abusive boyfriend and unpaid bills. She died at 40, when McCraney was 23. Alvin, the middle name he uses, is a tribute to her.

That’s the fire in which this multi-award-winning writer was forged. He now crafts plays packed with poetic language and vivid imagery, an aggregate of rawness, reality, religion and mythology. Alliance audiences saw that in In the Red and Brown Water and will again in Choir Boy.

“If there’s another playwright as sensitive to the sound of words as to their detonation, you wouldn’t know it,” a Village Voice critic said in reviewing Choir Boy.

How does McCraney do it? He’s not sure. He reads often, but slowly, he says. And he listens a lot. He finds that everyday poetry — things friends say, Game of Thrones — get stuck in his head, so he throws them back out onto the page. “I don’t know how else to describe it. I will visit moments in my life, and I will hear it rather than see it.”

Like his Choir Boy characters, McCraney has been known to harmonize. There was the church choir at age 9 or 10, then the high school chorus at Miami’s New World School of the Arts. “I realized I couldn’t sing very well,” he says, in typical self-effacing fashion. “I’m musical enough to know when I am flat and sharp and that I shouldn’t sing by myself.”

Beyond Choir Boy, he’s immersed in his 10-actor adaptation of Shakespeare’s Antony and Cleopatra, a history/tragedy play usually done with a cast of 17 to 44. Setting it Saint-Domingue (now the Dominican Republic) rather than Egypt and the Roman Empire, he says, should make the Bard’s language and the play’s complexities more relatable for today’s audiences.

Although he’s still looking to make enough money to eat regularly and buy a house, the Kendeda competition was a turning point in his life. “Kendeda said to me that writing plays is important, and I still feel that way,” he says. It also led to his partnership with director Tina Landau, another Steppenwolf ensemble member, who has now directed his work six or seven times.

Success has also brought a Wikipedia page. “It weirds me out,” he says. “I’m like, ‘Who put this up and why?’ ”

Kathy Janich, Encore Atlanta’s managing editor, has been seeing, covering or working in the performing arts for most of her life. Full disclosure: She’s affiliated with Weird Sisters Theatre Project listed above. Please email: kathy@encoreatlanta.com.