The three have taken over for co-founders Del Hamilton and Faye Allen, who created the company in 1979 and now hold the titles of director of special projects and producing director, respectively.

The company’s 35th seasons begins with a bang in late September. Haverty directs the world premiere of The Navigator, about a journey through time to save the future. He’s adapted it from the 2008 young adult novel by Irish writer Eoin McNamee and will stage it as a roving, large-scale production using multiple venues at the Goat Farm Arts Center in West Midtown. He promises giant puppets, film and shadow projection and otherworldly objects. Actors, too. Its recommended for “brave children and thrill-seeking adults.” It runs Sept. 27-Oct. 13.

The rest of the season, a mix of 7 Stages originals and presentations, takes place at the company’s Little Five Points theater and lines up like this: 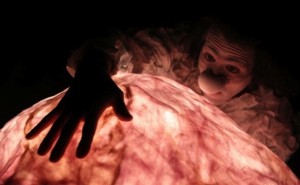 No(se)onenowhere. Nov. 15-17. Performed by Dimona, a young group of artists from the south of Israel. In No(se)onenowhere, a single actor creates a universe of gibberish, placards and theatrical effects. (Pictured: actor Ofir Nahri. Photo by Asher Svidanski)

The Secret History of Love. May 29-June 1. Transgender choreographer Sean Dorsey reveal the underground ways that LGBT people have managed to survive and love each other in decades past.

In June, 7 Stages holds its first interactive theater festival, titled Curious Encounters and offering viewers entry to a world where nothing is as it seems. The June 14-15 fest will include artists from Saiah, the Object Group and Out of Hand Theater, as well as composer-performer Klimchak and others.

Also this summer 7 Stages will again immerse itself in Youth Creates, a teen training and performance program that culminates in an original work created by the young ensemble. This year, the program’s 11th, metro students will be joined by students from Israel and the Netherlands. The performances are July 26-27.

For details on Curious Encounters, Youth Creates and the 2013-14 season, visit 7 Stages HERE.