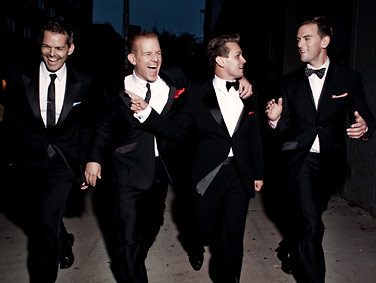 Looking for something cultural to do in the next week or so? Here’s our select list of recommendations. Pictured: The Midtown Men (from left) J. Robert Spencer, Christian Hoff, Michael Longorio and Daniel Reichard sing 1960s hits with the Atlanta Symphony Orchestra on Friday and Saturday.

Burundanga. Aurora Theatre’s Teatro del Sol presents this comedy about a poor and pregnant Barcelona woman, her boyfriend and the dangers of telling the truth. In Spanish with English supertitles. The burundanga of the title, it turns out, is a powerful truth serum. Through April 28. 8 p.m. Thursday-Saturday; and 2:30 p.m. Sunday. Details, tickets HERE or at 678.226.6222.

Equus. FINAL WEEK. Some plays are classics because teachers say they are. Others are classics because they never lose the power to thrill, shock and engage an audience. Peter Shaffer’s 1973 Equus, at Actor’s Express, is a roller-coaster drama about a psychiatrist’s attempt to make sense of one young man’s horrifying and brutal crime. Contains nudity. Kyle Brumley and Chris Kayser head a cast of 14. The critics: “A great production of a contemporary classic, easily one of the season’s best bets” (Andrew Alexander, ArtsATL.com); “A wonderful production with great performances and designs that highlight some of Atlanta’s best talent” (Kenny Norton, AtlantaTheaterFans.com). $22-$45 plus fees (booking online is cheaper). 8 tonight-Saturday; and 2 p.m. Sunday. 887 W. Marietta St. Details, tickets HERE or at 404.607.7469. For discounts, visit PoshDealz.com 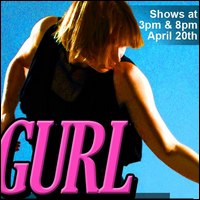 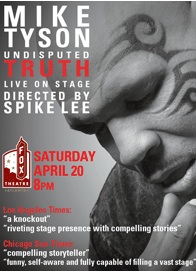 Mike Tyson: Undisputed Truth. The one-time boxing champ of the world brings his one-man stage show to the Fox Theatre for one night only. The show, directed by Spike Lee, is billed as a “rare, personal look inside the life and mind of one of the most feared men ever to wear the heavyweight crown.” $79-$200. 8 p.m. Saturday. 660 Peachtree St. N.E. Details, tickets HERE or at 1.855.ATL.TIXX. For discounts, visit PoshDealz.com.

Moby-Dick. Saiah Arts International (Rua | Wulf) puts its spin on the epic whale tale with an immersive, migrating experience in the 60,000-square-foot Lifecycle Building Center  in West Midtown. Audience members will follow Ishmael on his journey and witness the edge of  madness. Wear good, sturdy, comfortable  shoes. Each audience limited to 60 people. The critics: “Go see this show. That’s about all that needs to be said about a production that’s inarguably special, worthwhile and remarkable” (Andrew Alexander, ArtsATL.com). $25 advance; $30 at door. Through May 12. 7:30 p.m. Wednesday-Sunday. Performance begins at sundown. No intermission. 1116 Murphy Ave. Tickets HERE.

Petite Rouge. FINAL WEEK. A swamp chorus sings backup in Synchronicity Theatre‘s 65-minute zydeco musical. Imagine a Cajun Red Riding Hood (a duck), with a big, bad gator in the wolf role, and a wild chase through Mardi Gras. From Joan Cushing, the playwright/composer of the Junie B. Jones and Miss Nelson musicals. With plenty of wit, it’s definitely not just for the kids. Back by popular demand. The cast, which is rarely still: Jessica DeMaria, Brian Harrison, Renita James, Taryn Janelle, Michael Stiggers and Alex B. West. $12-$40. 7:30 p.m. Friday; 3 and 7:30 p.m. Saturday; and 2 and 5 p.m. Sunday. At Horizon Theatre, 1083 Austin Ave. N.E. Details, tickets HERE or at 404.484.8636. For discounts, visit PoshDealz.com. Meet ensemble member Michael Stiggers in this Encore SNAPSHOT.

Sister Act. OPENS TUESDAY. Broadway in Atlanta presents the musical based on Whoopi Goldberg’s 1992 feature film about a diva wannabe trying to elude the mob. The score is by Alan Menken. $30-$70. Through April 28. 8 p.m. Tuesday-Friday; 2 and 8 p.m. Saturday; and 1 and 6:30 p.m. Sunday. Fox Theatre, 660 Peachtree St. N.E. Tickets, details HERE or at 1.855.ATL.TIXX. Read more about the musical in this Encore FEATURE.

Sixties Hits With the Midtown Men. Four performers from the original Broadway cast of Jersey Boys return to the 1960s, singing hits by Frankie Valli and the Four Seasons, plus such pop favorites as “Happy Together” and “Up on the Roof,” with the Atlanta Symphony Orchestra. The Midtown Men are Tony Award-winner Christian Hoff (who played Tommy DeVito), Michael Longoria, Daniel Reichard (Bob Gaudio) and J. Robert Spencer (Nick Massi). Michael Krajewski conducts. Note: This is not a performance of Jersey Boys and is not affiliated with the show in any way. $24-$60. 8 p.m. Friday-Saturday. Symphony Hall, 1280 Peachtree St. N.E. Details, tickets HERE or at 404.733.5000. 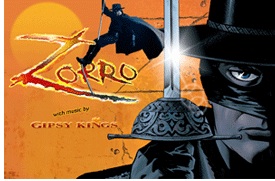 Zorro. From the American West comes the legend of Zorro, a fighter of corruption and lover of beautiful women. This flamenco extravaganza, which has played Europe and London’s West End, comes to the Alliance Theatre in a new American adaptation featuring songs from the Gipsy Kings. The critics: “After all this time, Zorro should, quite frankly, be further along in its development. What the production has going for it, however, is flair” (Jim Farmer, ArtsATL.com); “The narrative is crowded, the fight choreography sometimes lacks sizzle, and some of the big ensemble numbers look and sound a little messy, yet the music and the visuals never fail” (Wendell Brock, The Atlanta Journal-Constitution). $30-$70. Through May 5. 7:30 p.m. Tuesday-Thursday; 8 p.m. Friday; 2:30 and 8 p.m. Saturday; and 2:30 and 7 :30 p.m. Sunday. Alliance Theatre mainstage, 1280 Peachtree St. N.E. Details, tickets HERE or at 404.733.5000. For discounts (next Wednesday only), visit PoshDealz.com. Read more about the score and the Gipsy Kings in this Encore FEATURE.

Kathy Janich, Encore Atlanta’s managing editor, has been seeing, covering or working in the performing arts for most of her life. Full disclosure: She is affiliated with Synchronicity Theatre mentioned above. Please email: kathy@encoreatlanta.com.