You’ve seen him in the pit — just a hand with a baton waving in the semi-darkness. He — or sometimes she — is easy to ignore, but essential to any musical.

We’re talking about the conductor, without whom there’d be no music. There’s a lot more to the job than you might imagine.

Brent-Alan Huffman (Beauty and the Beast, Leap of Faith, Little Shop of Horrors) has been with Sister Act since it began six years ago and is doing double duty on this tour. He’s music directing as well as conducting; each job has its own peculiarities.

As conductor, Huffman maintains the pace of the show and the tempo of its music. With Sister Act, the musical styles and tempos vary greatly, so he sets the pace and shapes the music’s intensity.

“I also cue the orchestra and the physical intentions of the orchestra,” he says. “Is it a heavy sound or is fast and forward? I create that physically with my hands and body to give that intention to the orchestra.” 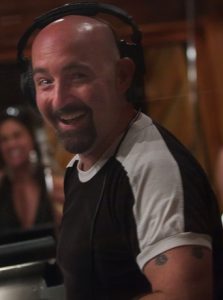 He’s also a support system for the actors. Although they know when to start and stop singing, sometimes they need to see him. That’s done via a monitor that usually hangs from the balcony rail, as it does at the Fox Theatre, so they can sneak a peak when necessary.

The cast interacts more with Huffman when he’s got music-directing hat on. He’s their vocal coach from the get-go. Once a show opens, he’ll hold a vocal brush-up rehearsal every two or three months, sitting in the audience once a week and taking notes.

The “notes” are usually little reminders, like remembering to start and stop on the third beat instead of the fourth.

“I want them to be in the top vocal shape,” Huffman says. “The music is an extremely important and exciting part of the show, and I want that excitement to read through every single time.”

Just as in the 1992 movie featuring Whoopi Goldberg, the music provides the undergirding for the story. Deloris Van Cartier is still a worldly singer who witnesses a mob crime, then hides as a nun in a convent, where she has trouble fitting in.

While the movie has 11 tunes, mostly pop songs written by the likes of Smokey Robinson (“My Guy”) and the Isley Brothers (“Shout”), the stage score is original and comes from composer Alan Menken and lyricist Glenn Slater, who wrote  14 new songs.

“People are not disappointed by the score at all,” says Huffman. “It is so uplifting and catchy. It’s fresh and new, but still feels familiar. The premise is still there. [Deloris] is teaching her music, the kind of music she sings in her night club, to the nuns in a way to help them find their joy and spirits.”

For Huffman, it’s was the talented Menken (Beauty and the Beast, Newsies, The Little Mermaid) who made the transition from movie to musical easier. The two first worked together in 1995 on the stage version of Beauty and the Beast.

“In this show, we have the songs from Mother Superior, and the songs are much more cerebral,” Huffman says. “The lyricist has some really smart lyrics for her, and the music is sort of Sondheim-esque. Then, you’ve got the musical theater ballads, R&B for the thugs, and disco for Deloris and the nuns. Alan’s a master of all of them.”

Getting that mix right has been a trial-and-error project, one that was tested with Atlanta audiences in 2007, when the Alliance Theatre staged the show. Huffman is excited to bring the musical back to the city for a homecoming of sorts. (Sister Act subsequently had a run of more than a year on Broadway.)

“When we were in Atlanta, we were still trying to figure out the show,” he says. “I want people to see the changes, to see this version now. You can tell from an audience what works and doesn’t work. The show has been very well-received throughout the country, and I think Atlanta was part of that.”

Kenny Norton is a freelance writer who has written web content, articles and marketing/PR materials. He is also contributing editor and administrator of www.AtlantaTheaterFans.com.