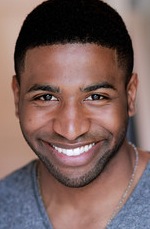 In brief: Michael, 27, a 2012 Suzi Award nominee for best actor in a musical (The Leading Player, Pippin at Legacy Theatre) is early in his Atlanta career but definitely someone to watch. He’s onstage through April 21 in Synchronicity Theatre’s witty, wild Mardi Gras adventure, Petite Rouge (details, tickets HERE or at 404.484.8636).

Frog/various: Technically, that’s his billing in Petite. In reality, he plays 10 (or so) characters in the hourlong musical, moving through costume pieces like a madman overdosed on Red Bull (but in a good way).

Lives now: In Marietta, with two roommates, both actors.

Where you’ve seen him: At Legacy in The 25th Annual Putnam County Spelling Bee, and at the Springer Opera House in Big River, Footloose, The Full Monty, Peter Pan and The Wizard of Oz (Cowardly Lion).

The theme park route: Spent two seasons doing a total of four shows — three or four performances a day, six days a week — at HersheyPark in Hershey, Pa., including the wonderfully titled Bunsen and the Burners, a Halloween musical (think: “Love Potion No. 9”). He’s twice been nominated for male performer of the year by the International Association of Amusement Parks and Attractions.

Educated? Yes. Has a bachelor of science degree in theater education from Georgia’s Columbus State University.

Musicals only? Not necessarily. He’s done dramatic roles in Dracula and several one-acts at Springer Opera House. “I would like to into more non-musicals,” he says, “but the voice seems to be my niche.” He’s not at all averse to TV and film roles, either. Hello, anyone?

First time onstage: Grew up a pastor’s kid and remembers reciting the Linus speech from “A Charlie Brown Christmas” in church at about age 5. He also remembers nodding to the tech man and saying: “Lights, please.”

Why theater: “I love that theater gives us the opportunity to connect with people, with the audience, with other performers. I have so much extended family from doing one show to the next. I take it as my own kind of ministry. I see it as something I was meant to do.”

Dream roles: Has already checked off a couple — Pippin‘s Leading Player,  comfort counselor Mitch Mahoney in Spelling Bee. Still on the list — Usnavi (the Lin-Manuel Miranda role) in In the Heights, the first show he saw on Broadway, and Seaweed in Hairspray.

Next: Look for him as Marius in Les Misérables, opening July 25 at Aurora Theatre, where he’ll also do summer camp, teaching choreography.

Parting shot: Ask him for his Michael Jackson impersonation. The man claims he can moonwalk.

Kathy Janich, Encore Atlanta’s managing editor, has been seeing, covering and and working in the performing arts for most of her life. Full disclosure: She’s affiliated with Synchronicity Theatre, mentioned above. Please email her at kathy@encoreatlanta.com.