Write Club Atlanta meets on the second Wednesday of every month. This month, it convenes Jan. 16. Next month, it’s Feb. 13. The location: The Highland Inn Ballroom Lounge, 644 N Highland Ave. N.E. in the Poncey-Highland neighborhood. $10-$20 at the door.

Think word crafting is a solitary occupation best shared through the printed page? That literary readings are refined affairs for the select few? Let us introduce you to Write Club Atlanta — a monthly word fest that amps up the volume and the competition, and transforms writing into a spectator sport. This isn’t your grandma’s poetry reading!

On the second Wednesday of each month, with rare exceptions, writers and wannabes are lured from their secret lairs or day jobs to share their words on prescribed topics, such as Method vs. Madness or Reality vs. Fantasy. Two writers face off onstage and decide who goes first with a lively round of “Rock, Paper, Scissors.” Yes, this is a serious competition. The clock is set. Each “combatant” has seven minutes to impress, engage, entertain and win over an audience prepared to listen, imagine, interact and, ultimately, judge a winner by clapping, screaming and foot-stomping.

Nicholas Tecosky, viceroy and host, calls it “bare-knuckled lit, the tenderest bloodsport.” Tender only in that the sliding ticket price ($10-$20) goes to charities chosen by each of three bout winners.

The idea to spotlight local writers and spring their words from page to the mic was conceived by Chicago writer/performer Ian Belknap, according to Tecosky, a screenwriter and actor, whose horror film V/H/S made the cut for the 2012 Sundance Film Festival.

Tecosky and Myke Johns, who serves as producer and consigliere (no mundane titles here) brought the franchise to Atlanta more than a year ago. By day, Johns is a producer with Atlanta’s NPR station WABE-FM (90.1). Together they brainstorm topics, lure writers and sometimes do battle.

“The idea is to expose writers to a larger audience who wouldn’t go to a formal reading, but will come to a fast-paced, fun event with an open bar,” says Tecosky. “Our audience has doubled in size since we started.”

Journalists, actors, professors, playwrights, novelists, poets, bloggers and people who love to write make up the competitors. “We’re lucky that Atlanta has a large pool of talent. Now that the word is out, writers often come to us,” he said. 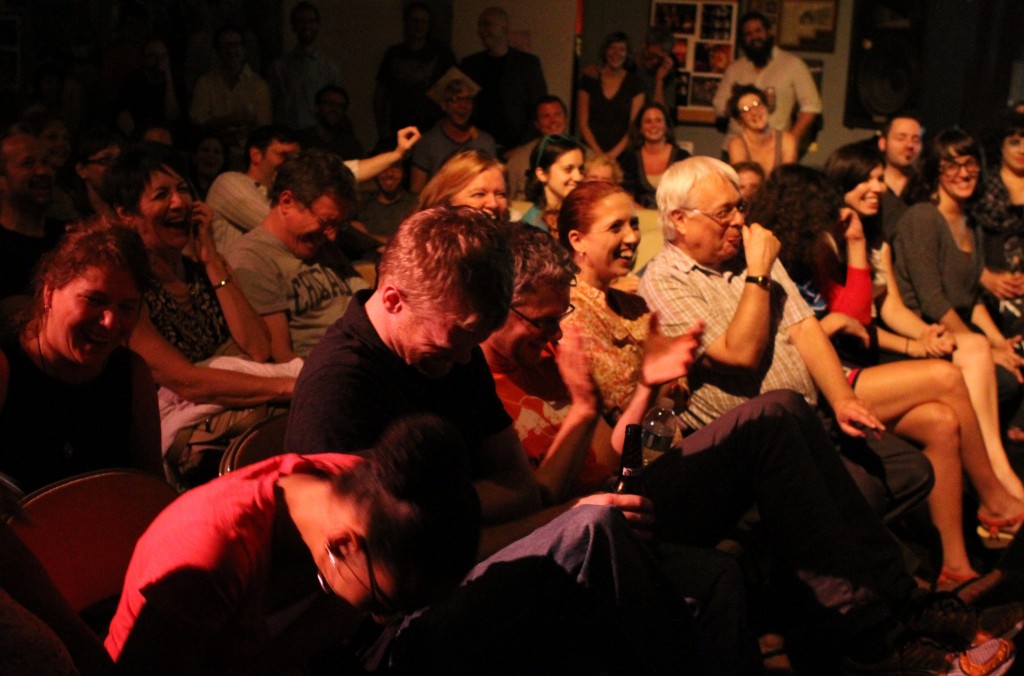 Any given month, the intimate event is standing-room-only long before the first face-off. Recently, a young woman and first-timer, surveying the crowd said, “I was told that if you like beer, cats and hats, you’d fit in here.” There’s a respectable queue at the bar. Two free adoptable kittens are passed from hand-to-hand, and everyone is shouting and laughing above the rock music.

Fred and Ami Johns have come to support their son, Myke, who competes this night. “We first saw the show at the Decatur Book Festival and have come whenever we can ever since,” says Fred Johns. “It’s a bit raucous and irreverent, but as far as entertainment value goes, we’ve never been disappointed.”

The audience buzz is at fever pitch by the time Tecosky yells “Are you ready to Write Club?” The roar is hockey- or football-worthy. Interactive banter runs through the choosing of three judges and the introduction of the first two combatants. But once the oversized timer starts, there is silence.

“You never know whether you’ll hear a rant, an essay, a story or a short play, but whatever you hear, it won’t be boring,” says Tecosky, who for the topic “Method,” wrote a stream-of-consciousness glimpse of a writer at work and procrastination. “Not knowing what to expect is exciting, and at least once a night, I get blown away.”

Write Club posts podcasts of the performances on its website, but “they can’t truly capture the energy,” Tecosky says. Connected only by a string of words, there is shared laughter, empathy, understanding and, sometimes, magic. (You can also follow the shenanigans on Facebook.)

“The challenge is always to write something good,” says Johns. “Writers receive their topics about two weeks before, but most everyone is still writing at the last minute. It’s difficult and scary to perform your work, but the onus is on you to bring your ‘A’ game.” For the topic ”filthy,” Johns described two brothers returning to their childhood home to find it full of memories, confusion and trash created by their still-living father. It was a winner.

Johns credits Write Club Atlanta with inspiring him to write again. “It was the exact kick in the pants I needed,” he says. “To be part of something that is helping to build enthusiasm for writers in Atlanta is so fulfilling.”

Laura Raines is an Atlanta freelancer who specializes in writing about health care, education, business and the arts.