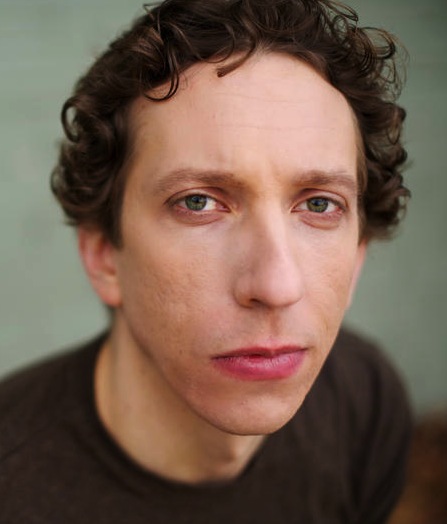 In brief: Eric, a man of many, many faces, has been acting in Atlanta since 2005. These days you’ll find him slinging waffles in Horizon Theatre’s open-ended encore run of Waffle Palace: Smothered, Covered and Scattered 24/7/365. He plays seven characters in the course of the show, with 14 or 15 costume changes. He’s lost count. Tickets, details HERE.

Grew up: Near Winston-Salem, N.C. Went to college at Campbell University near Raleigh. “I didn’t go to school to be a theater major. It was just sort of inevitable.”

Lives now: In Atlanta’s Edgewood neighborhood, near Little Five Points and East Atlanta, with his actor-wife, Bethany Anne Lind, and their cat, Cranston, aka Cranny.” They didn’t know she was a she when they named her.

Where you’ve seen him: At Georgia Shakespeare (A Midsummer Night’s Dream, Romeo and Juliet); Theatre in the Square (Tradin’ Paint); Theatrical Outfit (A Confederacy of Dunces, Big River, The Chase); Georgia Ensemble Theatre (What I Did Last Summer, Last Night of Ballyhoo); and, back at Horizon, in In Darfur.

On screen: “Revolution” on NBC and “Army Wives” on Lifetime (television), among others. And the movies What to Expect When You’re Expecting, Trouble With the Curve, Echo at 11 Oak Drive, Lawless and the upcoming 42 (with Harrison Ford), due in April.

First time onstage: He remembers singing a solo in the fifth grade but points to a seventh-grade project as the  game-changer. He and his best friend wrote e a play about Bud and Weasel, a couple of alien. They thought their teacher would hate it, but they ended up producing and directing it for the whole class. Eric — in his first star turn — played Weasel. “We were just goofing off, and I got a good grade for doing it. It was a middle-schooler’s dream.”

Meanwhile, back at the Waffle Palace: Eric’s seven characters are Ralphie, a nebbish regular for whom nothing ever goes right; Tommy, a real estate guy and former UGA quarterback; Rocker, a Kid Rock-type musician; Waffle Fact Man, an endearingly nerdish guy who gets a buzz from talking about the joys of the Waffle Palace; Blues Singer, the kind of good, ol’ country-blues singer found at bars all across the South; Gary, the neighborhood police officer who tazes a Waffle Palace waiter; and last, but not least, Vivien, everyone’s favorite Waffle Palace drag queen.

Why theater: “Stories are important. They’re what last in life, and they’re also what makes life worth living. To be part of telling a good story, whether it’s to warn about something so we don’t repeat the past or to make someone laugh, is a good way to make a living.”

Next: Eric exits Waffle Palace on Feb. 17 (the show has just been extended through March 17) to do Other Desert Cities by Jon Robin Baitz at Florida Rep in Fort Myers.