Don’t be surprised if you hear the turkey squawking.

Even so, on its Facebook page, the Goat Farm calls itself an arts center. 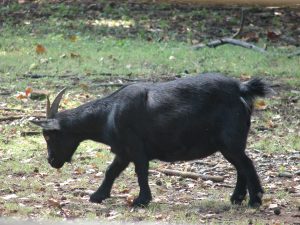 Anthony Harper and Chris Melhouse, owners and developers of the property, are emphatic that it’s an arts center, but that first and foremost, it’s something else.

That was not their original plan.

The 12-acre space in West Midtown opened in 1889 to make cotton gins. In 2008, when Harper and Melhouse saw it, caved-in roofs and broken windows pocked its red-brick buildings, which seemed on the verge of collapse. They planned to build apartments and condos on one side and a commercial area with restaurants and shops on the other. They contracted to manage the property then, in 2010, bought it.

“After spending about 30 or 60 days walking around the property — mostly trying to talk ourselves out of it,” Harper says, laughing, “we fell deeply and dangerously in love.”

The site is deceptive. The lights of downtown seem within arm’s reach, yet you feel far removed from civilization. It’s an industrial gothic compound and arts sanctuary with an abundance of green space. The Goat Farm is many things: rehearsal space, live-work artist studios, a place to convene, a venue for live indie music and hard-to-categorize events, and home to an emerging supper club.

The Goat Farm today has more than 400 loft apartments and studio spaces, both of which are rented to people pursuing creative endeavors. It has six acres of outdoor and indoor performance and exhibition space, including the 10,000-square-foot Goodson Yard, and a venue that measures 2,500 square feet. The site includes the Warhorse coffee shop and library; the PushStart Kitchen restaurant; a floral and design firm; the organic Fresh Roots Farm; and yes, goats, along with a few chickens and that turkey.

The dance troupe gloATL and theater companies SAÏAH International and the Collective Project are artists-in-residence. AMC’s “The Walking Dead” filmed here, as did the movie Catching Fire: The Hunger Games.

The business model has created quick success in a little more than two years. The waiting list for apartment space is at 289, give or take; 80 percent of available studio space has been built. Then there’s that atypical support for the arts.

Harper and Melhouse use a portion of apartment and studio rental fees to create arts and investment packages. To qualify, performers and artists — who need not live there — submit proposals to a review board. The Goat Farm provides those chosen with space, resources, some staff and other logistics for free.

“We take care of the technical, logistical and production backbone of a project —all of the boring stuff — for no cost,” Harper says. “So they can focus on the creative side of their project.”

Instead of using a portion of rental revenue for marketing or “typical boring real estate” ads, they’re invested in arts projects. Harper admits that the idea is somewhat altruistic, but says it’s also self-serving.

“As long as the performances are selected well, they create a tremendous amount of buzz,” he says. “We can take money and put it in one ad or invest it into a performance. If that performance is perceived well, then it gets written up in multiple publications and maybe even mentioned on the radio. Instead of one ad, we are getting five or six ‘ads’ for that same dollar.”

Harper hopes some of Atlanta’s nonprofit arts organizations — “where art funding is anemic” — will consider his business model.

He and Melhouse have started talking with developers in Castleberry Hill and downtown Atlanta about bringing their mix of business and arts/culture knowledge to projects there.

“What we are doing here,” Harper says, “is being seen as a possible solution for helping revitalize downtown Atlanta.”