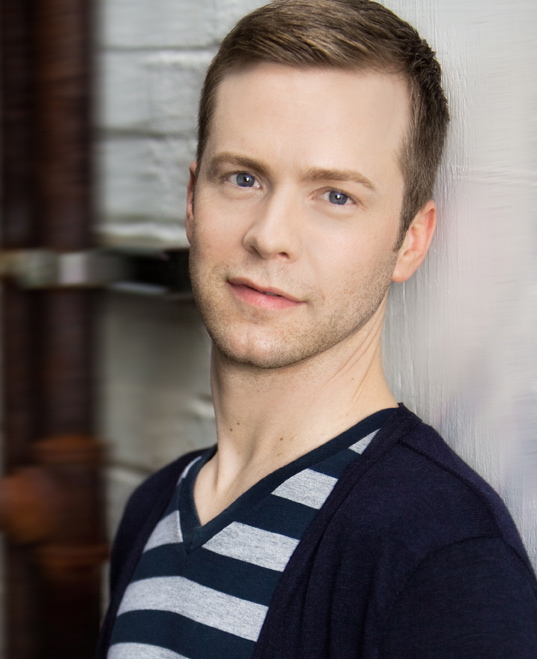 In brief: You’ve seen Clifton be everything from a singing bat/boy to a best friend in a cheerleading skirt. Right now he’s the ax-wielding protagonist in Wolves at Actor’s Express, a 70-minute thrill ride for adults from the twisty mind of playwright Steve Yockey, a native Atlantan turned Los Angeleno. See Wolves (or else!) through Dec. 2. Remember, he’s got an ax. Details, tickets HERE.

Hometown: Iron City in southwest Georgia. Population: 312. His home was in the middle of peanut fields, cornfields and cotton fields, yet he comes from “a very liberal, supportive, arts-loving family.”

Lives now: Ormewood Park with Chad Gough, his partner of five years, and their schnauzers Baxter and Boris.

Where you’ve seen him: At Actor’s Express in The Judas Kiss, The Goat, or Who Is Sylvia and Beautiful Thing. At Synchronicity Theatre in Exit, Pursued by a Bear and Lobster Alice. A long time ago at Dad’s Garage as the title character in Bat Boy: The Musical. At the Alliance Theatre in A Christmas Carol and Ferdinand the Bull.

Where you’ve seen him (on screen): As Amy Adams assistant Neil in the feature film Trouble With the Curve (2012). Upcoming: as a Google espresso bar barista, with Vince Vaughn, in The Internship (due in April) and as the waiter in a Parisian cafe in the spoofy Scary Movie 5 (also in April).

Training: Bachelor of arts in drama from the University of Georgia. Master of fine arts in performing arts from SCAD. Four seasons as an artistic assistant at the Alliance.

First time onstage: In a kindergarten play about the presidents. He was George Washington’s father, who spanked George for cutting down the cherry tree.

Why theater: “I wasn’t your typical boy in South Georgia. I’m from a family of all boys, who did sports. Playing characters was always my default way of expressing myself and connecting to other people. It’s the only activity that has made me consistently happy from childhood.”

Dream role(s): The young playwright in Deathtrap. Something in the play that became the Hitchcock movie Rope, about two Oxford students who murder their friend, stick him in a trunk, then serve his parents dinner on top of the trunk. Prior Walter in Tony Kushner’s Angels in America.

Best show he’s seen recently in which he wasn’t acting: “I loved [director] Justin Anderson’s Tigers Be Still at Aurora. For the script. For his work on it, the cast, Aurora for doing it and programming it.”

Day job? As artistic associate at Theatrical Outfit, where he works at the front desk, assists in the box office and with casting. He also does research for season planning, script tracking and more. “I am now doing what I love 24/7,” he says.

Next five years: “I am just happy with the status quo. I have a great day job. I have a great family life. Maybe there will be more regional work. But this is home. It’s the community I love. I can be myself here. I don’t want to be a household name or a Hollywood star. It’s not who I am. It’s not what I want to do. I’m going to be right here doing quality work whenever I can.”