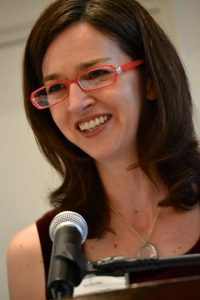 Synchronicity Theatre, the women-run company known for its smart, gutsy and bold work, will celebrate its 15th anniversary season with a world premiere, a new work in development, a couple of old favorites and a new way to share its vision.

The season opens Oct. 26 with the world premiere of The Minotaur by New York playwright Anna Ziegler. It continues in December with the long-awaited return of A Year With Frog and Toad and in March-April with a remount of last season’s musical Petite Rouge. In includes the development of Beyond Reasonable Doubt: The Troy Davis Project by Atlanta playwright Lee Nowell (details on all below).

Synchronicity is one of several Atlanta companies without its own home. Shows this season will be staged at Horizon Theatre, the 14th Street Playhouse and Aurora Theatre in Lawrenceville. That fact and a clearer vision of what it does and who it is prompted Synchronicity to change how it puts its season together.

“We’ve been looking at what makes us unique in Atlanta,” says co-founder and producing artistic director Rachel May (pictured. “It all comes down to community. We’re not necessarily a theater that produces five shows a year on the same stage, with a little outreach thrown in on the side. What we are is a vital theater whose work appears onstage, in schools, in detention centers and group homes. We work with other organizations to amplify the themes and messages in our plays. And we continue to develop new theatrical experiences.”

This year features three shows onstage, the annual Women in the Arts Panel Luncheon in February, a spring symposium that invites conversation on the death penalty, the award-winning Playmaking for Girls performance in June,  and the ongoing PFG (making theater with incarcerated teenage girls) and Playmaking for Kids (introducing young children to theater) programs. Here is what you’ll see onstage:

The Minotaur by Anna Ziegler. Oct. 26-Nov. 11. Performed at Horizon Theatre. The classic myth about a man-bull is retold from the perspective of its characters, who must relive their story each time the myth is invoked. Modern technology both advances and complicates the story, and the traditional chorus is imagined as Western society stereotypes — a priest, a rabbi and a lawyer. A joint world premiere with Rorschach Theatre in Washington, D.C., Synchronicity’s sixth national joint premiere in the past six years.

A Year With Frog and Toad. Dec. 7-30. At the 14th Street Playhouse. The winner of four 2007 Suzi Bass awards (including best musical) returns with its original Frog (Bryan Mercer) and Toad (Spencer Stephens). The family-friendly show shares a year in the life of two great friends — the cheerful, popular Frog and the rather grumpy Toad. Suzi-winning director Clint Thornton also returns.

Petite Rouge. March 29-April 21. At Horizon Theatre. This musical hit from last season is part fairy tale, part adventure. Imagine the story of a Cajun Red Riding Hood told with a big, bad gator in the wolf role, and a wild chase through Mardi Gras — all with a rollicking zydeco score. Much of last season’s cast returns for then encore as does director Justin Anderson. The show will be performed for Gwinnett County schoolchildren at Aurora Theatre before moving to the Horizon.

Finally, Synchronicity has commissioned Nowell to write Beyond Reasonable Doubt: The Troy Davis Project, a work-in-progress that investigates what we believe about the death penalty. Troy Anthony Davis was executed by lethal injection Sept. 21, 2011, for the 1989 murder of police officer Mark MacPhail in Savannah. He proclaimed his innocence to the end. Plans include public discussions, social media dialogue and more. Watch the Synchronicity website, Facebook page and Twitter feed for details.

Encore Atlanta’s managing editor Kathy Janich has been seeing, editing, writing about or working in the performing arts for most of her life. Full disclosure: She’s affiliated with Synchronicity Theatre. To suggest someone for this column, please email kathy@atlantametropub.com.