Stephen Spielberg’s film adaptation of the stage play War Horse opened at Christmas 2011 and went on to earn six Academy Award nominations. The stage play, which premiered in London in 2007, used an elaborate puppet to represent Joey, a horse who experiences the trials and tribulations of World War I. With a $66 million budget, Spielberg put puppets aside and placed live animals on spectacular landscapes, putting his War Horse in the tradition of such equine entertainments as The Black Stallion.

Comparing a flesh-and-blood Joey on-screen with a cane-and-metal construction onstage might seem like no contest at all. Not true. Seen live, Joey the puppet is somehow more realistic than a real horse. The Center for Puppetry Arts’ Jon Ludwig says his peers nicknamed Joey “The Marlon Brando of puppets,” and not since Julie Taymor’s The Lion King has stage puppetry so seized the public imagination.

The size of a real horse, the puppet has an aluminum chassis and visible frame, giving it something of a steampunk look. Within minutes of seeing Joey twitching his ears and shaking his mane, all artifice vanishes. He becomes an actual horse half-trained and a little “tetchy.” 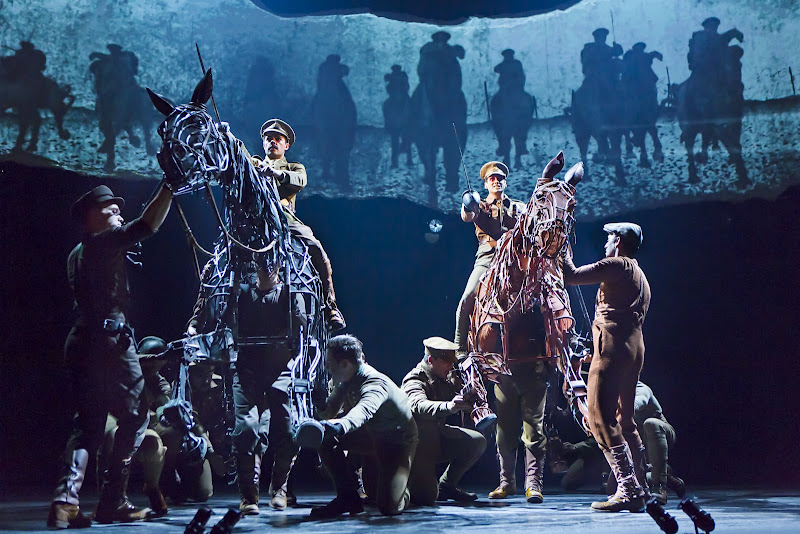 War Horse originated with directors Marianne Elliott and Tom Morris of England’s Royal National Theatre, who sought a collaborative project with the stunningly inventive Handspring Puppet Company of South Africa. Morris’ mother recommended a 1982 children’s novel by Michael Mopurgo called War Horse. The author uses the first-person narration of an English farm horse purchased by the cavalry to depict the horrors of World War I. With the opening lines, “My earliest memories are a confusion of hilly fields and dark, damp stables…,” Joey offers an objective viewpoint on the Great War from the English, French, German and animal perspectives.

Joey requires the close, collaborative work of three puppeteers, each with a specific position and nickname. “The Head” stands outside the horse with hand on his bridle and controls Joey’s eye-line and overall attentiveness. “The Heart,” standing inside the frame at the front legs, conveys the horse’s breath and overall weight and power. “The Hind,” in the back legs, takes charge of the tail and directs the gait of the horse, from walk to trot to gallop. Actor Tim Lewis said that the National considered putting a skin over Joey’s frame, but “technically that doesn’t work, because the puppeteers inside couldn’t see out, which would be dangerous.”

The Heart and Hind not only have to support the 100-pound frame, but occasionally the weight of actors like 160-pound Lewis, who rides Joey at times. “By the end of the show,” says actor/puppeteer Ian Piers, “you’re dripping with sweat and crying in the shower. It’s a crazy job. I never thought I’d be playing the hind of a horse.”

The two performers inside Joey’s frame never evoke the kind of vaudeville-era pantomime horse that is rone to pratfalls and dance steps. Joey more closely evokes the stripped-down, symbolic presentation of Equus (at Actor’s Express in the spring), in which actors wear stylized masks and convey the idea of horses more than attempting a literal imitation.

The winner of four Tony Awards, War Horse impressively replicates a horse’s movements, from playful little flicks of his tail to rearing majestically on his rear legs. As much as you can admire the beauty of movie horses, the play connects you directly to Joey’s emotional life.

Curt Holman writes about arts and entertainment for Creative Loafing, Atlanta magazine, ArtsATL.com, Paste and Encore Atlanta. He has won awards for critical writing and, in 2005, was a National Endowment for the Arts fellow in theater/musical theater.