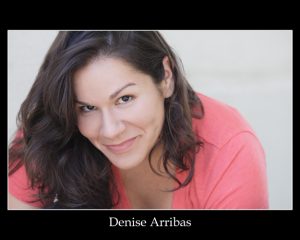 In brief: Denise, 32, plays the tempestuous addict Veronica in The Motherf••ker With the Hat, running through April 14 at Actor’s Express. Before that, she sang and danced her way through Bye Bye Birdie as leading lady Rose Alvarez at Stage Door Players in Dunwoody. The Hat tickets here.

Hometown: San Juan, Puerto Rico. Moved to the United States for college in 1998.

Where you’ve seen her: In Buddy: The Buddy Holly Story at Georgia Ensemble Theatre; A child’s garden of verses and Ferdinand the Bull at the Alliance Theatre; and Junie B. Jones, A Year With Frog and Toad and References to Salvador Dali Make Me Hot at Synchronicity Theatre. Also (in alphabetical order) Atlanta Shakespeare Tavern, Aurora Theatre, Center for Puppetry Arts, Georgia Shakespeare, Horizon Theatre, 7 Stages and Theater Emory.

Day job: Healing through laughter as part of the Big Apple Clown Care Unit at Children’s Healthcare of Atlanta. Also does voice work with Enghouse Interactive.

Education: BFA in musical theater from Shorter College in Rome, Ga. It had to be a Southern school; no cold weather for this girl.

First theater she ever saw: Peter Pan in Puerto Rico when she was 4. Saw it four times. “I fell madly in love with it, but I was a little freaked out when I found out that Peter Pan was a girl.”

First theater she ever did: As a Puerto Rican frog called a coqui that sings at night. At an event to honor her grandmother, a poet. “I vaguely remember someone pushing me onstage because I wasn’t sure what to do.”

Dream job/role: Anita in West Side Story. “I would wish that that would come sooner than later,” she says, referencing her age. She’s done the show before. As Shark Girl No. 2. Anita and the other Shark Girls were not Puerto Rican or Latina in any way. She was not happy.

On her iPod: Marc Anthony doing salsa in Spanish. It’s her Motherf••ker playlist, to get her in the mood to play Veronica. “There is a part of my brain that connects better in Spanish than in English.”

Endquote: “If you know me, you know everything about me.”

Kathy Janich, Encore Atlanta’s managing editor, has been seeing, covering or working in the performing arts for most of her life. Full disclosure: She’s affiliated with Actor’s Express, mentioned above. Please email: kathy@encoreatlanta.com.