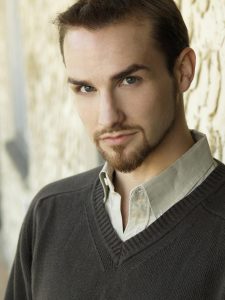 In brief: J.C., 32, is in the midst of an amazing two-fer. He left Horizon Theatre’s reprise of Avenue Q (Rod, Trekkie, others) to play Clyde Barrow in the brand-new musical Clyde ‘n Bonnie: A Folktale at Aurora Theatre in Lawrenceville. Clyde ‘n Bonnie, a tough ticket, has just been extended through April 15. Tickets: $25–$35. www.auroratheatre.com or 678.226.6222.

The “J” and the “C”: They stand for James and Charles, his grandfathers.

Hometown: Born in Loveland, Colo. Grew up in Sand Springs (near Tulsa) in Oklahoma. Moved to Memphis when he was about 10, and graduated from Sprayberry High School in Marietta.

Education: Traded rocket science for Shakespeare. Was studying aerospace engineering at Georgia Tech when he chose “happiness” over “financial stability.”

Day job: Not so far, but that may change since he’s decided to forgo a roommate.

First paid acting job: As the Clockwork Mouse in Theatre Tulsa’s production of The Velveteen Rabbit in 1984 or ’85.

Strangest paid acting  job (tie): His first Hamlet, in which he went from full Elizabethan drag to Fortinbras in full armor with only a scene between. Or a closeted gay Republican investment banker that was a puppet. Or all three baby ducklings in Honk! at the Alliance Theatre.

Fave playwrights: Shakespeare, hands down. For musicals, Stephen Sondheim. Also a fan of Lauren Gunderson, a San Francisco-based playwright who grew up in Decatur (Synchronicity’s Exit, Pursued by a Bear and Van Gogh Cafe; Class at Dad’s Garage;
Leap at Emory University).

Plugs: In June and July he’ll play Feste in Twelfth Night at the Atlanta Shakespeare Tavern.