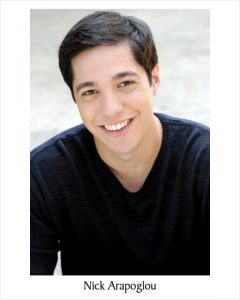 This feature is new to Encore Atlanta. Let us know how you like it.

In brief: Nick, 26, won the 2011 Suzi Award (Atlanta’s version of Broadway’s Tonys) as best actor in a musical for his performance as Princeton in the irreverent Avenue Q at Horizon Theatre. He and the rest of the Q‘ers are back onstage by popular demand through April 1. Horizon Theatre. 404.584.7450.

Where you’ve seen him: Onstage as the Elvis-loving Nelson in End Days at Horizon; Spring Awakening at Actor’s Express; and Academy the Musical and The Storytelling Ability of a Boy (Suzi nomination) at Aurora Theatre. He’s also performed at Theatre in the Square, Theatrical Outfit, Synchronicity Theatre and the Alliance Theatre. Also, on television as Fashion School Kid in VH1’s “Single Ladies.”

Why theater: A bone disease in middle school made sports, his passion then, off limits. He’d never done any organized singing or theater, but a friend suggested he audition for the musical Peter Pan. He was cast as Captain Hook because, he says, he was the only guy whose voice had dropped.

Dream role: Tony in West Side Story. “I don’t think I will ever possess the dance skills for it.”

Parting shot: Through his stage and film work, he’s been able to become a full-time actor. No more “would you like that triple grande mocha hot or iced?”

Kathy Janich, Encore Atlanta’s managing editor, has been seeing, editing, writing about or working in the performing arts for most of her life. She spent 25 years in daily newspapers and was most recently on staff at Atlanta’s smart, bold and gutsy Synchronicity Theatre. To suggest someone for this column, please email kathy@encoreatlanta.com.