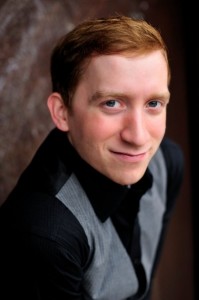 In brief: Jimi, 25, seems to have a thing for art and artists. He played Andy Warhol (for the High Museum) in October’s Little Five Points Halloween Parade. He’s has a much more buttoned-up look in his current gig, Red at Theatrical Outfit. He plays Ken, the put-upon assistant to volatile modernist painter Mark Rothko. He and scene partner Tom Key, as Rothko, continue their pas de deux through March 11. Tickets: theatricaloutfit.org or 877.725.8849

Jimi, with an ‘i’? Kocina grew up in Woodstock, where he was just one of many “Jimmys.” On a paper one day in fourth grade, he switched to “Jimi.” It stuck. An effort to stand out from the crowd? Maybe, he says.

Where you’ve seen him: Perhaps his first big break came in dark play … or stories for boys at Actor’s Express in 2007. He played a 14-year-old online predator who toys with an older boy. “I had some crazy things to say,” he recalls. He’s also done Spring Awakening and Zanna, DON’T at the Express and Harold the Dog in Bunnicula at Synchronicity Theatre along with numerous roles at Horizon Theatre, Georgia Ensemble, Aurora Theatre and the Alliance Theatre.

First time onstage: At age 14, in Oliver!, staged by the Cobb Children’s Theatre at the Cobb Civic Center. He played Mr. Sowerberry the undertaker, probably the oldest character in the piece. And one of Fagin’s boys.

Why theater: “I remember being in the dressing room at Oliver! and lacing up my boots. I was having so much fun.” His thought at the time: “I think I really like this.”

Dream role: The one he’s playing now, he says. “I came to this realization not too long ago that Ken is really the first character I’ve played where I can say that the character is way smarter than I am.”

Next: “Fingers crossed, I will have a line that will not be cut in What to Expect When You’re Expecting.” (He’ does an ultrasound on Anna Kendrick.) The feature film, headlined by Cameron Diaz, Jennifer Lopez, Chris Rock and Dennis Quaid, is due in theaters in May.

Kathy Janich, Encore Atlanta’s managing editor, spent 25 years in daily newspapers and was most recently on staff at Atlanta’s smart, bold and gutsy Synchronicity Theatre. To suggest someone for this column, please email kathy@encoreatlanta.com.